The ‘Keeping Up With The Kardashians’ star and NBA player looked like they were having a romantic getaway, as they shared a kiss.

Things are certainly heating up in Italy! Kendall Jenner, 25, and Devin Booker, 24, were straight-up smooching on their trip to Italy on Thursday August 26. The KUWTK star gave her boyfriend a kiss on the cheek, which turned into full-blown making out, as the pair enjoyed dinner on land before hopping back on their yacht! 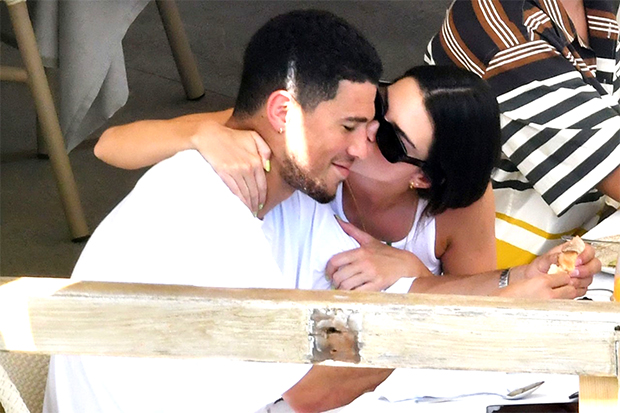 Both Kendall and Devin were dressed in all white for their meal. The Phoenix Suns guard wore a plain white-t-shirt and shorts. He accessorized with a silver watch. Kendall rocked a white tank-top with a drawing of orange tulips decorating the front. She also sported a light green mini-skirt and a square pair of sunglasses for the idyllic dinner, before the pair headed back to their yacht.

It seems like Kendall and Devin are having a great time on their vacation to Italy. The 818 Tequila founder also took to her Instagram Stories to share a video of model Fai Khadra taking a jump off the side of the boat. She also showed off a dazzling, neon green dress while relaxing on the deck on Tuesday August 24. The reality star looked stunning in the plunging top. She’s also been photographed sporting a colorful bikini, as she kicked back and laid down on a simple floatie next to her boyfriend.

Kendall and Devin have been dating for over a year, and they’ve looked enamored with each other throughout their trip. The NBA player and Olympic gold medal winner has shown his affection for his lady, as he’s spent lots of time with her on the boat. Devin’s had quite a busy year between competing in the NBA Finals against the Millwaukee Bucks and then the Tokyo Olympics. A source close to the couple told HollywoodLife that the player was excited to spend much of his downtime with his girlfriend. “Devin had a long season in the NBA making the finals and then almost instantly headed into the Olympics,” the source said. “With basketball, it has been taking much of his focus away from Kendall and now that he has about a month before he has to start up again, he is looking to spend all his time with her.”