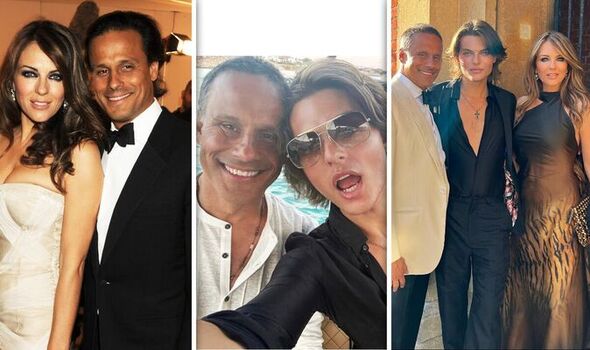 Elizabeth Hurley, 57, and international businessman Arun Nayar were married from 2007 until 2011.

At the time of their wedding, Liz’s son Damian was just five-years-old, and Arun built a strong relationship with his stepson.

Damian, 20, has now shared his love for his “Daddyo” in a heartfelt tribute on his birthday.

The model shared a selection of photographs of the pair, including a throwback shot of Arun in his wedding attire cradling a young Damian.

In the caption, Damian wrote: “Happiest of birthdays to my gorgeous father.”

Damian’s biological father is businessman Steve Bing, who died in 2020 during the Covid pandemic.

Damian Hurley shared a selection of snaps with Arun Nayar, along with the caption: “Happiest of birthdays to my gorgeous father.”

Damian included a throwback shot of Arun in his wedding attire cradling the youngster in his tribute.

Although Arun is not Damian’s biological father, the pair share a close bond, even after his split from Damian’s mother Liz Hurley.

Liz Hurley and Arun Nayar posed with Damian Hurley at his graduation in July. The 20-year-old model wrote in the caption: “Mama and Daddyo at graduation with mee.”

Elizabeth Hurley and Arun Nayar started dating in 2002 before marrying in 2007.

Liz Hurley and Arun Nayar remained friends even after their divorce. She previously told You that they had “the most amicable divorce in the world”.