The daughter of Late Sen. John McCain and former ‘The View’ co-host receives support from those who find her post relatable and those who are against body-shaming.

AceShowbiz –Meghan McCain has had enough of naysayers. The former “The View” co-host went into a Twitter rant on Wednesday, January 5, slamming those who talked negatively about her physical appearance.

“It continues to be bizarre to me so many pundits and comedians with big platforms are so triggered by my body and spend so much time and energy talking about it,” she tweeted. “And it’s multiple people.”

She went on to note, “Teenage girls are literally killing themselves over our toxic culture towards women bodies.” 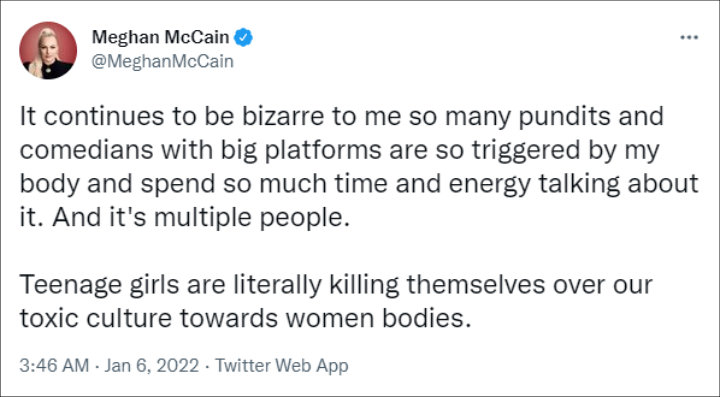 The daughter of late Sen. John McCain received support from those who found her post relatable and those who were against body-shaming. “Spending even one second talking about your body is complete nonsense on their part,” one user replied. “You’re exactly right. Eating disorders are rampant among young girls and the pressure to be perfect and they have no right adding to this problem.”

“There are lots of things to criticize you about, but your body sure as hell isn’t one of them,” someone else added. “I have been critical of some of your tweets because I don’t agree with you politically. That said, you are a very beautiful lady. Nobody should be criticizing anyone for their looks. You should block them since they’re not worth it.”

“We don’t agree on a lot of things. But you have my respect. For staying true to yourself. I respect how you handle the BS when it comes to your body and them trying to shame you. Again we are on opposite sides on a lot of issues. But I appreciate your intelligence and passion,” another user added.

This wasn’t the first time for Meghan to speak out against body-shamers. Back in 2019, one user rudely told her to go on a diet after she shared a photo of her dressed in hot pink for Breast Cancer Awareness month. “It’s harassment like this that can lead women to eating disorders,” Meghan clapped back at the time. “I am one of the lucky ones who never suffered from it. Hope young girls see me and know they don’t have to diet either.”