You may only know Taylor Momsen as the adorable child actress from The Grinch or the teen star from Gossip Girl, but for the past decade she’s been living a very different life.

As the frontwoman of The Pretty Reckless, she’s found more success than she ever did as an actress and gotten to live out her rockstar fantasy.

Sadly the past few years have delivered some really crushing blows to her surreal existence. And as she told Metro in a recent interview it was personally devastating:

“I won’t speak for everyone, but I went very, very down.”

The first hit came as the end of what had been a dream come true: the band got to tour with Soundgarden. She told the outlet:

“If you know anything about me you know how much the Beatles and Soundgarden are my favourite bands in the world, so to be opening for them was the highest of possible highs. I couldn’t believe it.”

Unfortunately that was in the Summer of 2017. Fans of Chris Cornell will know exactly what that means. The singer died by his own hand on May 18. Taylor remembered:

“I woke up to the most, I don’t even have words, devastating news that Chris had passed and it crushed me in a way that I can’t explain and I was not prepared for as a person. I wasn’t in a good place mentally to be public. I cancelled touring, I went home.” 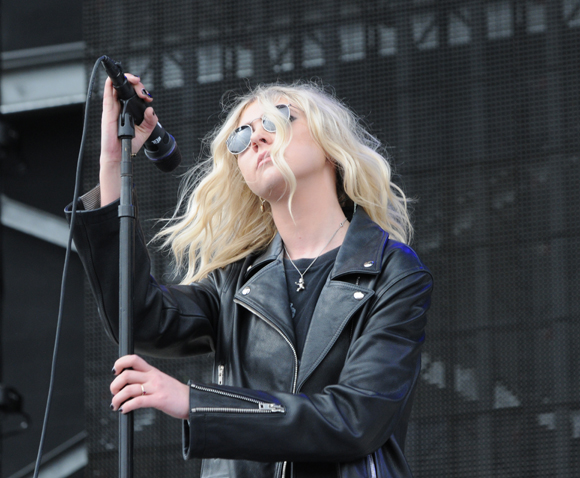 But her idol’s tragic death was just the first of two heartbreaking blows in less than a year’s time. She revealed:

“I needed to attempt to process what had happened and kind of get my s**t together, and as soon as I started to heal from that a little bit and do that — I was starting to write again, we were talking about going into the studio… as soon as we started to get those plans rolling, I got the phone call that Kato had died in a motorcycle accident.”

That would be her producer Kato Khandwala, who passed away on April 25, 2018. Less than a year into her coping with Cornell’s suicide. She explained:

“It was the nail in the coffin for me, for lack of a better term. He was so much more than a producer. He was a fifth member of the band and my best friend in the world. I can’t explain our relationship but it was so immensely close.”

The death even closer drove Taylor over the edge into drugs and depression:

“That was it, my life felt like it was over and I went very down to this utterly dark hole of depression and substance abuse and I was a mess. I was living in this hole of darkness that I was not sure I would ever get out of. I wasn’t sure if I wanted to. I had kind of given up on life, I’d given up on everything at that point — I wasn’t sure if I wanted to make music again. I’d given up as a person. It was very dark.”

So how did she pull herself out? Music. It wasn’t just her life now, it was her lifeline. She said:

“It was music that saved me. I know it sounds really cliche but it was rock and roll and music that pulled me out of it and I eventually got to a place where I could start listening to records again. I just started listening to bands that have pulled me through my whole life, and that eventually led to me writing the album, which is different than our other records in a lot of ways, but one of them being that I really didn’t have to try to write this record, it just poured out of me. It was where I was at in life and everything that had happened, it was so ingrained in me and it’s so overtaken me that it was who I’d become. So this record really just almost the flow of consciousness. That’s what saved me.”

The new record, Death By Rock And Roll, dropped on February 12, but the title track — out since last Summer — is full of imagery of drugs and suicide and motorcycle crashes. You can really see how the two losses impacted her songwriting.

She didn’t get into specifics, but Taylor believes the downward spiral would have taken her life if she hadn’t had this musical outlet:

“I poured everything I had into this album. It sounds cliche but blood, sweat, tears. I was at the brink of death, and I had to make a decision at some point, which was death or move forward. And because of music I chose to move forward so this album very much feels like a rebirth.”

We’re so glad she was able to find her way out of the darkness. And that she’s making art that’s going to inspire others to do the same.