Season 25 of The Bachelor starring Matt James is off to a refreshing start. Minutes after the Jan. 4 premiere, ABC dropped a new preview of what’s to come, which includes petty catfights, newly-introduced women, and a few tearful moments for Matt. Yet one surprise even threw Chris Harrison for a loop: Heather Martin is officially on Matt’s season.

Fans might remember that Heather appeared on Colton Underwood’s season and made a splash after declaring she’d never been kissed. “Heather, what are you doing here? You could honestly destroy this whole thing for Matt,” Chris ominously tells her in the clip after she casually rolls up to set. Later in the video, Heather finds Matt alone on a couch and greets him. “Heather?” he says. “I feel like I’m in a dream right now.”

To be honest, Heather’s surprise arrival is the type of dramatic shakeup Bachelor Nation has grown used to. And it’s possible (though not confirmed) that Matt and Heather knew each other before filming. After all, she’s friends with Hannah Brown, who’s friends with his best friend Tyler Cameron, and well, the Bachelor universe isn’t that big. Did Matt and Heather secretly DM? Is this part of a larger scheme to keep fans hooked? Will Matt pull a Clare Crawley and leave early?

No idea. But her moments on the show clearly throw all the other women off, forcing one contestant to burst into tears and say, “You already had your f*ck*ng shot at the Bachelor, like, go home.” Will she? At one point in the clip, Heather also cries and says, “This is, like, an impossible situation. Still, like, I do feel like Matt’s worth it.”

Aside from the juicy drama, Matt’s first few moments onscreen already gave the series a much-needed facelift by directly addressing his race — his mom is white and his dad is Black — and the pressure that comes with being the first Black Bachelor. He told Chris Harrison that growing up in an interracial family is part of the reason he has a tough time opening up to women. 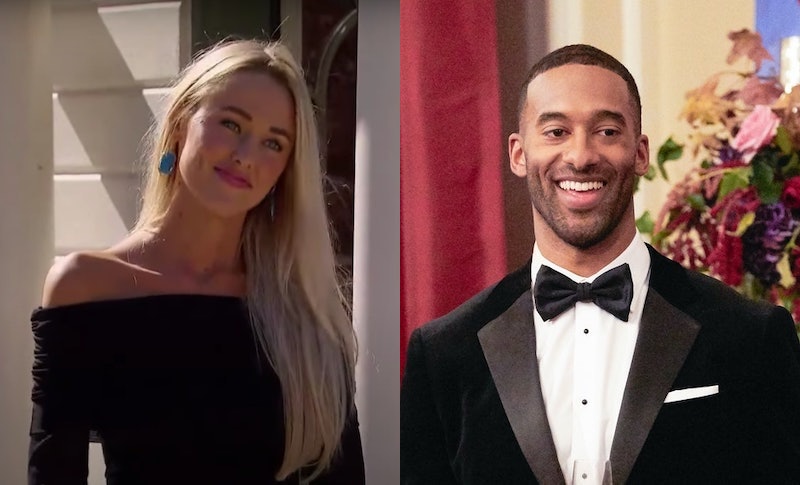 And while it’s exciting to see the beloved franchise champion diversity and further amplify the voices of Black Americans, the cheesy tropes fans love to tune in for (ahem, Heather’s arrival) surely aren’t going anywhere. Sounds like Matt is really gonna have to figure out who’s in it for "the right reasons."