In the final episode of “Keeping Up with the Kardashians,” the reality family reminisced on past moments from their 20 seasons on E!, and opened up further on the status of their relationships. Kourtney Kardashian opened up to her sisters on why she didn’t see herself getting back together with ex-Scott Disick, while Khloe Kardashian expressed whether or not she saw herself getting married again.

The one relationship that was often hidden from “KUWTK” was the marriage of Kim Kardashian and Kanye West, yet the SKIMS owner finally opened up about her divorce in the two-part finale. “I feel like a f****** failure, that it’s like, a third f****** marriage,” the reality star said (via Page Six) in tears in the final episodes of “KUWTK.”

In the final moments of the reality series, the Kardashian reiterated her desire to find “complete bliss,” speaking to her momager Kris Jenner. “That’s what I’m so excited for. Just like, waking up at 40 and realizing like, I just want total happiness,” said Kim. “I know obviously complete bliss is like not a full reality, but if I can have it more of a majority of the time, that’s all I want to do. Wherever that takes me, I just want my pure happiness. So that’s what I’m working on. Figuring out how to get there.”

Kim continued, revealing to fans she felt lonely during her seven-year marriage to Kanye West. 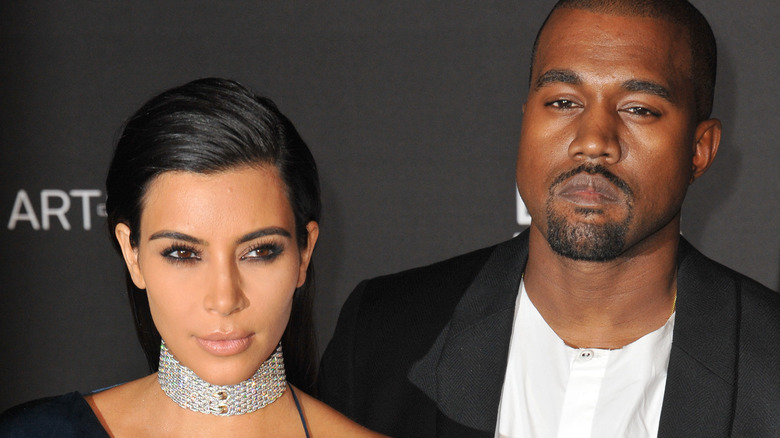 Despite never publicly acknowledging reports of an impending divorce, Kim Kardashian officially filed for divorce from Kanye West in February.

“I’ve lived up to my expectations and achieved 10 times more than I even thought was humanly possible, but I don’t have a life to share that with,” admitted Kim on-screen (via Us Weekly). “I never thought I was lonely and I never — I always thought, ‘That’s totally fine. I could just have my kids. My husband moves from state to state and I just, I’m on this ride with him.’ And I was okay with that,” said Kim. “And then after turning 40 this year, I realized like, ‘No. I don’t want a husband that lives in a completely different state. To me, I thought, ‘Oh, my God, that’s when we’re getting along the best,’ but then that is sad to me and that’s not what I want. I want someone that we have the same shows in common. I want someone who wants to work out with me.”

Kim revealed to her mom Kris Jenner she spent much of quarantine “third-wheeling” with sister Khloe Kardashian and Tristan Thompson. “I was like, ‘Wow, it’s, like, the little things I don’t have.’ I have all the big things. … I think I’m ready for the smaller experiences that I think will mean a lot.”

Here’s to finding what you’re looking for, Kim!