Videos of the rapper fighting two men were published online 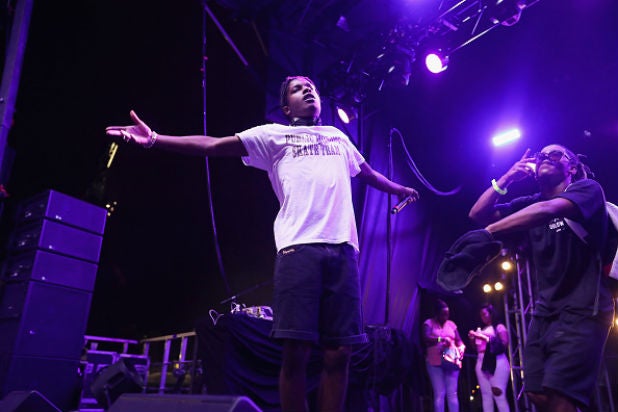 Hip-hop star ASAP Rocky was arrested in Sweden on suspicion of aggravated assault after a street fight that broke out on Sunday between two local men and members of his entourage, Swedish prosecutors told TheWrap.

Sweden’s Prosecution Authority said the rapper is one of four people who’ve been arrested and that two are suspected of aggravated assault and one of assault. The identities of the other three was not known.

“The arrest is a decision by a prosecutor,”said Karin Rosander, the SPA’s Director of communication. “A person can be arrested for three days before the prosecutor needs to request him detained. Detention is a decision made by a court. For the time being, ASAP Rocky is arrested, suspected for gross assault.”

AFP reported that the authorities have until Saturday to decide whether to formally take action. That’s the day before ASAP Rocky is due to headline Wireless Festival in London on Sunday, July 7.

Reps for ASAP Rocky and the Swedish prosecutors did not immediately respond for comment.

A video published by TMZ appeared to show the rapper punching another man in the street after Rocky’s performance at Stockholm’s Smash festival. In the video, the artist — born Rakim Mayers — can be seen throwing a young man into the street and throwing several punches at him while the man is on the ground.

Rocky has also posted several videos on social media which he said show the scene before the fight with a man following him. After the fight, Rocky and the other men attacking the man in the video then left the scene, leaving him on the side of the road. Police and an ambulance later showed up and  statements were taken from witnesses.

ASAP Rocky’s Instagram videos show he and his entourage repeatedly tell a pair of men to stop following them after one of the men accuses the rapper’s team of breaking his headphones. “We don’t know these guys and we didn’t want trouble. They followed us for four blocks,” ASAP Rocky writes in the caption for the first video.

Rocky also claimed that they were “drug addicts” and were harassing women.

“SO A FEW DRUG ADDICTS ARE NOT MY FANS , WE DONT KNOW THESE GUYS AND WE DIDNT WANT TROUBLE , THEY FOLLOWED US FOR 4 BLOCKS , AND THEY WERE SLAPPING GIRLS BUTTS WHO PASSED , GIVE ME A BREAK,” Rocky wrote in a caption.

In the second, he goes on to accuse one of the men following them of hitting his security guard “in the face with headphones.”