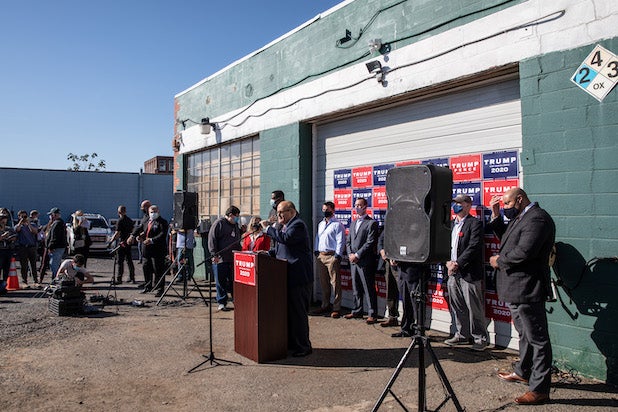 A documentary is in the works about the Philadelphia company Four Seasons Total Landscaping and how that small company got thrust into the 2020 election aftermath when Rudy Giuliani hosted an inexplicable press conference in front of it.

The film called “Four Seasons Total Documentary” is directed by Christopher Stoudt (“Camp ALEC”) and will document the ensuing roller coaster of media and public attention one well-meaning small business in Philly (the one that’s nearby a crematorium and a sex shop) went through when they agreed to host the bizarre Trump-related press conference on November 7, four days after the presidential election.

The documentary will also feature interviews with some of the key executives at the company, including owner Marie Siravo and director of sales Sean Middleton as they explain what they were thinking leading up to the press conference. The film intends to be apolitical and have a feel-good tone.

Four Seasons Total Landscaping was actually featured in a Super Bowl ad for the company Fivrr on Sunday night, and the video now has over 1.6 million views on YouTube.

“Four Seasons Total Documentary” does not yet have a distributor. The film was shot in secret and intends to complete production later this month.

“It’s an honor and privilege to be able to help tell a story that the world has been waiting months to hear,” the director Stoudt said in a statement. “After such a hard year, everyone needed a moment to laugh. Little did we know it would come from a press conference that took place across the street from a crematorium (down the road from a sex shop). This film is a chance to wipe the slate clean, not just for Four Seasons Total Landscaping, but for the entire country.”