Henry Golding was delighted to discover a visitor in his Los Angeles backyard.

“It’s a tiny hummingbird on my hummingbird feeder!” he said excitedly, turning his computer’s camera toward the bird in a recent Zoom interview. “Can you hear?” It’s the kind of gentle moment Golding has been relishing since swapping a globe-trotting filming schedule for the slower pace of life in a pandemic.

Previously a TV presenter in Britain, Golding, 33, starred as the wealthy, winsome Nick Young in “Crazy Rich Asians” in 2018, and has since rapidly built a career playing roles that call for a debonair touch. Last year, alongside Hugh Grant and Matthew McConaughey, he was part of Guy Ritchie’s all-star ensemble cast for “The Gentlemen,” and he is one of the latest rumored to be in the running to take over as James Bond.

But his new film “Monsoon,” written and directed by Hong Khaou, is a more introspective endeavor. In the drama, out now in Britain and the United States on Nov. 13, Golding plays Kit, a British-Vietnamese man returning to Vietnam for the first time since fleeing as a refugee at age 3. Back to scatter his parents’ ashes, Kit tries to orient himself in the streets of Ho Chi Minh City with unfamiliar relatives and in a new relationship with an American designer, Lewis (Parker Sawyers).

Kit’s search to understand his cultural identity will be familiar to many with immigrant backgrounds. What does homecoming mean when you’re returning to a place — and family — you barely remember? And what does it meant to do it as a Westerner?

In the recent video interview, Golding discussed how feeling “I was never Asian enough. I was never English enough” in the past helped inform Kit, the “magical” experience of making an indie film and what representation in Hollywood means to him. This is an edited and condensed version of the conversation. 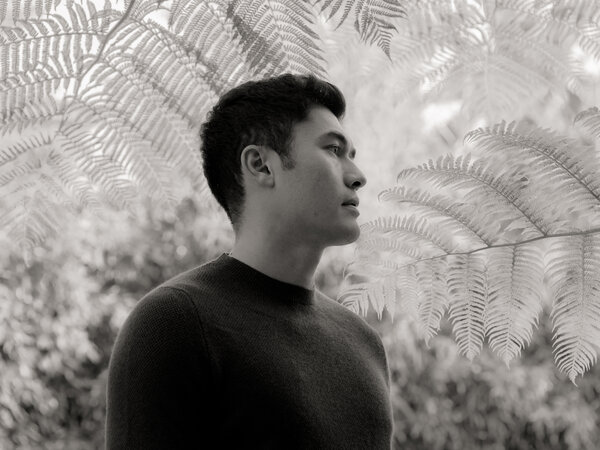 The role of Kit feels quite different from ones we’ve seen you play before. How did it come about?

“Monsoon” started casting before “Crazy Rich Asians” had come out. I was in this Hollywood limbo where no one really knew what I had been working on, and I immediately fell in love with the script for “Monsoon.” Not only because it was based in Southeast Asia, where I’d lived for the past 10 years, but also because of Kit’s journey of self-exploration. As a young man, straddling these two cultures of being half-Malaysian and half-English, I was always confused about who I was and what culture I represented. I was never Asian enough. I was never English enough. That’s something Kit has to get to the bottom of.

The film’s director Hong Khaou puts it really nicely: Are you a product of your naturalization or cultural background? Because I’ve got a British passport does that make me British? Or because I was born in Malaysia, does that mean that I’m Malaysian?

“Monsoon” explores the idea of having Asian heritage but still experiencing a place through a Western lens. Did that resonate with you, too?

I decided to move back to Malaysia back when I was 21. After leaving Malaysia at 8, I grew up in the Surrey countryside, and then worked in London. It was dumbfounding for the first few months to the point where I thought, “I don’t know what I’m doing here.”

There is a sense of white privilege when it comes to being mixed-race in Malaysia, because of the perception that you’re well-educated, or your parents are rich — which is far from reality — because of this deep-rooted sense of colonial supremacy. I’d never experienced that in the United Kingdom. There it was like, “Oh — you’re half-Asian.” It was never, “that’s exotic, that’s unique.” As a kid, there weren’t many other mixed-race kids around. Now it’s very different.

How did you prepare to play a British-Vietnamese character?

For this character, the less I knew, the better. Kit, as a young Vietnamese man, really had no connection to that part of his life. I read a lot about the struggles of how these immigrants came to countries like the U.K., and how that would have made an impression on your outlook. I had been to Vietnam a few times before filming so I was fairly familiar with it from a tourist point of view.

You’ve said that you were unsure about taking the role as a straight actor because Kit is gay. What was that conversation like with the director?

It’s a tough conversation. There was always a question: Does this role belong to me? Hong auditioned pretty much every type of young Asian man possible. He came to the understanding that I knew what Kit had gone through in a sense, so I was the best person for the job. For me, I’m going to give the best performance I can, and do this young man justice. Taking the role was the best decision I made.

What was it like to play Kit’s burgeoning relationship with Lewis?

Because the love interest plays secondary to Kit’s journey, it was fairly easy. He has these moments where he hooks up with a couple of guys but that’s almost a release — therapy for what he’s going through emotionally. Later on in the film, when tenderness comes into his interactions with Lewis, it shows that Kit’s becoming at ease in this alien world. He’s allowing himself to be at ease with who he is.

What does representation for the Asian diaspora mean to you? Is this the kind of film you want to do more of?

It was magical as an actor to be able to sit in a character’s feelings and confusion and history. I’ve been trying to find great material to work from like this, much more independent styles of movie making.

For representation, I think it is a long road. We definitely broke some ground with “Crazy Rich Asians.” There’s that fantastic new film from A24, “Minari.” With the director Bong Joon Ho’s films being on Netflix now, it’s only going to lead to more people to watch films like that. But the pace has to be kept. The representation has be not only onscreen, but as writers and directors. We’re all cogs in the system. There’s no end to it, it’s fighting the good fight, and not allowing the critics to quieten you.

You’ve become a leading man in a relatively short time in the acting world. How do you process the speed at which that’s unfolded?

It’s surreal, to be honest. It didn’t feel like I was in over my head going into “Crazy Rich Asians,” which was my first acting gig. When I was working as a hairdresser, every 45 minutes you meet somebody new. And then being a journalist for travel shows I was really getting to the bottom of culture and humans. It felt like I was working toward that first acting opportunity.

What are you hoping viewers take away from “Monsoon?”

A sense of wonderment and yearning for adventure, reminiscent of times when we’re able to experience countries like Vietnam unhindered by health or restrictions. But also the emotional side of wanting to get to the bottom of who you are as a person. If there’s anything you have at the back of your head, as an Asian-American person, ask your parents.

When I was still working on travel shows, I took my camera and sat my parents down for an interview. I have this beautiful video talking about their history and how they met. I treasure that video very much.