A special edition of The Atlanta Journal hit newsstands on July 30, 1996, a pivotal headline splashed across the front page: “F.B.I. Suspects ‘Hero’ Guard May Have Planted Bomb.”

It was three days after a lethal explosion killed one woman and injured more than 100 people at the 1996 Summer Olympics in Atlanta’s Centennial Olympic Park. The story would change everything for Richard A. Jewell, the security guard in question — even long after his name was cleared.

Before the report came out in the paper, now named The Atlanta Journal-Constitution, officials had used eyewitness accounts to compile a sketch of a man believed to have planted the pipe bomb in the park. But the F.B.I. wouldn’t release the sketch, and it wouldn’t yet name any suspects. A photo of a man near the blast site was too grainy for officials to make out any facial features.

Spectators in Atlanta and around the world, unnerved by violence at an event that celebrates global unity, were anxious for answers. Enter Jewell — who seemed to fit the bill of a lone wolf, as some news organizations began to speculate. Maybe he wanted to play hero for 15 minutes. (Never mind the lack of evidence.)

Jewell’s story is chronicled — and perhaps a bit dramatized — in “Richard Jewell,” Clint Eastwood’s latest directorial work, now in theaters. Here’s how the real events played out in the pages of The New York Times.

Jewell Was Hailed as a Hero …

Jewell was first referenced in The Times on July 28, 1996 — not by name, but as “an AT&T security guard,” in the paper’s initial story on the explosion. AT&T had hired Jewell and others through a security firm to keep an eye on its five-story sound and light tower in Centennial Olympic Park.

Jewell, then 33, had noticed an abandoned backpack under a bench near the tower and alerted an agent with the Georgia Bureau of Investigation. Together, they helped clear 75 to 100 people away from the area, the agent told The Times. The pipe bomb, inside the bag, exploded minutes later. Alice S. Hawthorne, a spectator from Albany, Ga., died in the blast; Melih Uzunyol, a Turkish cameraman running to cover the explosion, died of a heart attack soon after.

“The only thing I wish we could have done is got everybody out of the area,” Jewell said in an interview on CNN later that day. “I feel for the victims and their families and, I mean, it’s the Olympics. It’s supposed to be a time of joy for the world, and it’s a very, very bad thing.”

… Then Became a Suspect

Jewell’s life turned upside down after The Journal named him as the focus of the F.B.I.’s investigation. While the newspaper did not cite its sources for this information, Eastwood’s movie depicts a female reporter offering sex to an F.B.I. agent in exchange for it.

Government officials and news organizations descended on the apartment Jewell shared with his mother. Dozens of F.B.I. agents scoured the home and towed away Jewell’s truck. In an apartment complex overlooking his building, four stations — ABC, CBS, CNN and NBC — paid a tenant $1,000 a day to set up a command post in her unit.

Yet he was never charged. Inside, Jewell watched TV. He read. He played video games. He couldn’t go outside — not without setting off a high-speed car chase of government vehicles and media vans, anyway.

But beyond his walls, in the news, his case seemed to worsen. Details that appeared to support his guilt began to emerge: The Journal article quoted acquaintances of Jewell’s, who recalled him owning a backpack similar to the one that held the bomb. Officials at Piedmont College, a small Georgia school where Jewell had been a security guard, had called the F.B.I. the day of the explosion with concerns that Jewell was “overly zealous.”

If The Times’s reporting showed restraint, focusing more on the local frenzy than the man himself, it was thanks to hard-won lessons in sourcing, Max Frankel wrote in the paper’s magazine. “The Times had learned from its own sad transgressions over the years that whispered accusations against named individuals must not be trusted.” 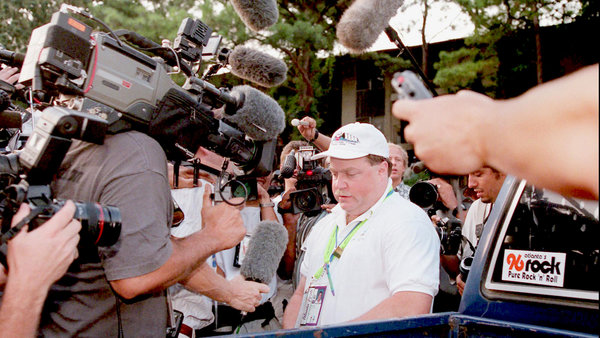 The Wrong Man, and the Legal Aftermath

Three months later, in a letter to one of Jewell’s lawyers, the Justice Department made it official: Richard Jewell wasn’t the man they were looking for.

It would take time for officials to track down the right one: Eric Robert Rudolph, an anti-abortion militant who, in 1998, was linked to other bombings, but evaded police for years. In 2005, he pleaded guilty to the bombings and received four life sentences.

The Justice Department admitted some fault in how federal agents handled the investigation into Jewell — specifically an early interview in which officials intentionally misled Jewell to ask him questions about the bombing. Their interrogation, agents told him, would be used for a training video.

In a memo first reported by The Journal and later confirmed by The Times, the department said that the deceptive tactics used for the interview constituted “a major error in judgment” from the F.B.I.

Jewell also sought legal action for the way he was characterized in the press, winning settlements from CNN and NBC. His libel suit against the company that owned The Journal lingered in the courts for years before the final claim was dismissed.

‘A Man Cleared, but Not His Name'

“He feels the stares of strangers in restaurants,” The Times’s correspondent Kevin Sack wrote one year after the bombing, “knowing they still wonder if he is the one.”

It had been nine months since the Justice Department cleared Jewell of any involvement. Still, the constant media attention he received at the height of the investigation had turned him into a public figure. Children asked for autographs. A woman he took on a date published a written account of the evening in a city magazine.

“I’m a lot more cynical than I used to be,” Jewell said in Sack’s story. “I’m not as trusting as I once was. And I don’t think I’m as outgoing as I used to be.”

Jewell died in 2007 at his home in Woodbury, Ga., after months of serious medical problems following a diabetes diagnosis earlier that year. He was 44.

In the headline of his Times obituary, Jewell was remembered how people knew him in those first days after the explosion: “Hero of Atlanta Attack.”