Of all the legendary Japanese beasts in the new film “Godzilla: King of the Monsters” from Warner Bros., Mothra is perhaps the unlikeliest of terrors. There’s Godzilla, of course, a T. rex-like creature with atomic breath, and Rodan, a turbocharged pterodactyl. King Ghidorah, the villain of the piece, is an enormous dragon with batlike wings and three flame-throwing heads.

Mothra? At the beginning of the picture, she’s a newly hatched caterpillar.

What Mothra might lack in apparent fierceness, however, she more than makes up for in fans, at least in her native Japan. Since her first appearance in the Toho Studios film “Mothra” in 1961, the supersized moth has appeared in 16 movies, including the 1964 classic “Mothra vs. Godzilla” (the first cinematic meeting of the two titans) and the 2001 “Godzilla, Mothra and King Ghidorah: Giant Monsters All-Out Attack. 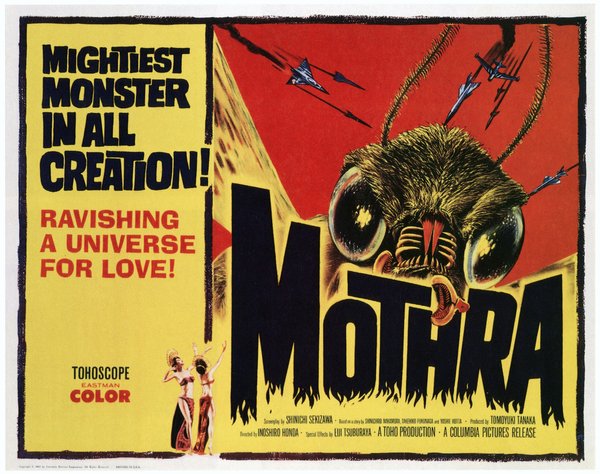 Among the dozens of fearsome creatures in Toho’s 87-year history, Mothra is second only to Godzilla in appearances and starring roles. In addition to topping fan polls (most popular among female viewers; favorite Godzilla co-star), she’s also been featured in more than a dozen video games since the 1980s.

“Godzilla: King of the Monsters,” which debuts May 31, is surprisingly Mothra’s first appearance in an American film. Although the movie boasts a strong human cast — Vera Farmiga, Millie Bobby Brown, Ken Watanabe and Zhang Ziyi — its main draw are all those promised battles royale: Godzilla vs. King Ghidorah. Rodan vs. Mothra. King Ghidorah vs. everybody else.

Mothra has always been a force for good, communicating with us puny humans through a telepathic link with two even punier beings, the foot-tall Shobijin, twin female fairies played in the original 1961 film by the Japanese pop duo the Peanuts. Unlike the capricious Godzilla, who goes from stomping Japan to bits in one movie to protecting it in another, Mothra is always a heroine, saving Japan from reptilian hotheads like Godzilla and protecting the cave-dwelling residents of Infant Island, who worship her as a goddess.

Sometimes she’s an egg, sometimes she’s a caterpillar, her life cycle repeated over and over, as the old Mothra “dies” and a new one hatches. “There’s even this theme of Christian imagery associated with her,” William Tsutsui, author of “Godzilla on My Mind: Fifty Years of the King of Monsters,” said.

In his latest incarnation, Godzilla is about three times the size he was back in the 1950s, and the other monsters, it seems, have followed suit. How’s a moth, even a giant one, to compete?

Even so, the director of the new film, Michael Dougherty, didn’t want to change the core elements that have made Mothra one of Toho’s most beloved monsters. “I really wanted to retain her beauty — her vibrant colors, and that very mystical quality that she has,” he said. “She isn’t just a giant moth.”

“She’s a very benevolent character, whereas all the other kaiju are obviously a bit more prone to destruction,” he added, using the Japanese term for these movie monsters. “She’s the yin to Godzilla’s yang.”

The task of tweaking the beast fell to the creature character designer Darnell Isom, whose first pass, ironically enough, resulted in a giant moth. “That was not what he wanted,” he laughed. “I even put the twins in the artwork, but they had modern clothes, and they were in New York, looking at this huge, very realistic-looking moth.”

For two months, Isom worked to capture that elusive mix of fearsomeness and beauty, moving from “really furry” (not a hit with the director) to totally hairless and “armorlike,” to “a little more alien.” Little by little, he made Mothra’s blue eyes big and saucerlike, like the original, and added fur to the creature’s face. “The fur instantly softens things up,” he said.

Isom also traded Mothra’s stubby legs for longer, more clawlike ones, much handier in a fight (in older films, Mothra did a lot of damage just by flapping her wings, which created gale force winds able to capsize ships). To solidify her kinship to Godzilla as queen of the monsters, the designers added enormous eye spots to her wings that mirrored Godzilla’s own distinctive orange eyes.

The designers also worked on Mothra’s larval stage, when she first bonds with Farmiga and Brown. In the Toho movies, Mothra spends much of her time as a large brown caterpillar (in her 1961 debut, she doesn’t metamorphose until more than 80 minutes in), with all the physical limitations that entails. In films like “Ghidorah, the Three-Headed Monster” (1964), she fights her enemies, in caterpillar form, by biting their tails and holding on for dear life, or by shooting a stream of milky goo at them.

In “King of the Monsters,” everything about larval Mothra is stronger, including her silk jets. “Their main note to us was that she had to feel large and imposing,” Isom said.

In a further nod to her Toho roots, the fairy twins are here, albeit in a very quick cameo. And they’re not Farmiga and Brown, who play mother and daughter Emma and Madison Russell, despite a lot of the early online speculation. “As a half-Asian kid growing up in Ohio, something I loved about the twins was that they were played by two Asian actresses,” Dougherty said. “I can see why people might see Emma and Madison as the modern-day twins, but I wasn’t going to change their ethnicity.”

Another thing the director didn’t want to muck with was Mothra’s pacifist tendencies. “Toho had a rule that she shouldn’t kill anyone intentionally,” he said.

That rule went beyond Mothra. “In Godzilla movies, you see very few people getting killed, after those early films,” Tsutsui said. “It’s very antiseptic in many ways. But Mothra in particular, it just doesn’t fit her image for her to be killing people.”

Not that there isn’t a lot of mayhem in Mothra films new and old. In “Giant Monsters All-Out Attack” Mothra battles Godzilla (who has absorbed the restless souls of those killed by the Japanese military in World War II), and the fate of Japan is at stake. In “King of the Monsters” it’s the planet itself in harm’s way, with Mothra again as protectress.

“What makes her so much more interesting than some of the other kaiju is that she sort of represents that endless cycle of life, death, and rebirth,” Dougherty said. “So even though she has this reputation of sacrificing herself in every film, if you really think about it, she never really dies, ever. And I think she knows that.”