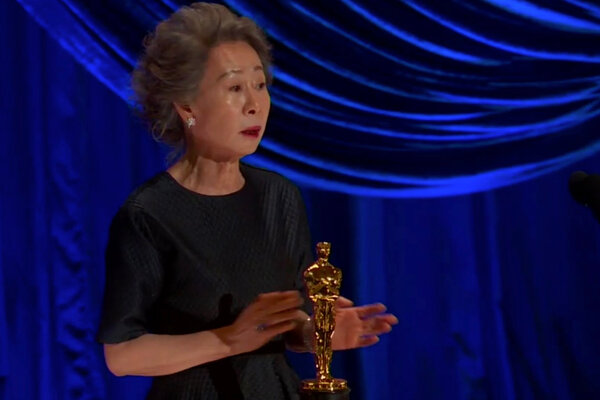 After the Korean actress Yuh-Jung Youn’s delightfully hilarious BAFTA acceptance speech earlier this month, the Academy gave the 73-years-young “Minari” grandmother the chance to deliver another Sunday night when it selected her as its best supporting actress. It is the first time a Korean actress has ever won an acting Oscar.

“I don’t believe in competition, how can I win over Glenn Close?” Youn said in her acceptance speech. “Tonight, I have just a little bit luck, I think, maybe. I’m luckier than you. And also maybe it’s American hospitality for the Korean actor. I’m not sure. But anyway, thank you so much.”

Youn triumphed as the grandmother in Lee Isaac Chung’s film about a family from South Korea who takes up farming near the Ozarks. The film is named for the leafy green vegetable popular in Korean cooking. Our critic A.O. Scott called it “in its circumspect, gentle way, moving and downright revelatory.” Scott classed Youn as a sly scene-stealer but noted that is “also true of her character, who infuses her daughter’s home with mischief, folk wisdom and mostly unspoken memories of war, poverty and other hardship.”

She also thanked her two grown sons, who she said “make me go out and work. … This is the result, because mommy worked so hard.”

This was Youn’s first nomination, and, until recent weeks, an invite to speechify on the film industry’s biggest stage was far from a sure thing. One of her biggest foes might have been the 74-year-old Glenn Close, who’s now been nominated eight times without a single statuette (can we give her an honorary Oscar yet?). But after Youn’s SAG Award win and smile-inducing BAFTA speech earlier this month that thanked British voters — whom she labeled “very snobbish” people — for selecting her, the race was hers to lose.

She didn’t repeat her BAFTA roast, but she did offer a kindly zinger Sunday night.

“As you know, I’m from Korea, and my name is Yuh-Jung Youn — most of European people call me Yuh Youn and some call me Yuh-Jung,” she said. “But tonight, you are all forgiven.”