Maybe this is the difference. The great artists and bands in any idiom would never dream of simply replicating their old work. That reeks of the mediocrity of being your own tribute band. No, the great ones can only investigate past material through the prism of their current creativity. No choice.

So it was as Dirty Three took up Vivid Live's invitation to perform their eponymously titled album of 25 years ago in its entirety, for the first time. 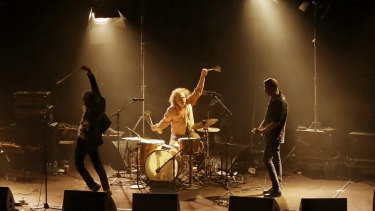 The Dirty Three clearly enjoyed themselves during their 90-minute set. Credit:Prudence Upton

Violinist Warren Ellis, guitarist Mick Turner and drummer Jim White (joined by original guest harmonica-player Tony Wyzenbeek) clearly enjoyed doing it, and with spontaneity being the band's middle name, the Dirty Three album's seven songs became a sandpit and the players set to work with their instruments like so many buckets and spades.

Inevitably they have grown musically in that time, as has the trio as an interactive entity, and so the songs now wore their exteriors loosely, with ample room for improvisation.

Fifty minutes of recorded music was massaged out to 90 – although within that came Ellis's trademark hilarity of 'tween-song anecdotes and banter, capped with a halo of pure eccentricity.

As ever, this eccentricity extended to the presentation and to the music, itself, as Ellis's spidery theatricality fuelled White's furious energy and vice versa, while Turner took care of the business of building the sandcastles the others gleefully pulverised.

Every song was reinvented, yet recognisable, with Ellis strapping on his rarely heard accordion to paint the little impressionistic poem that is Odd Couple, and distributing bullroarers to help create the eerie sound-world of Kim's Dirt.

The forte was the juxtaposition of plaintive melodies with the cyclonic force collectively whipped up on pieces including Everything's F—ed (which Ellis described as an "attempt at a hit single that went horribly wrong") and the closing Dirty Equation.

Yes, there were times when the focus went a little blurry, but Dirty Three remains as distinctive a rock band as any kicking around the planet. No mean feat.