Fans were saddened to learn that ZZ Top’s longtime bassist and founding member Dusty Hill died on July 28 at 72, per TMZ. Hill is just the most recent musician to die suddenly. Slipknot drummer Joey Jordison and rapper Biz Markie also died in July.

Hill’s bandmates, Billy Gibbons and Frank Beard, first broke the news. “We are saddened by the news today that our Compadre, Dusty Hill, has passed away in his sleep at home in Houston, TX,” they wrote in a Facebook statement. “We, along with legions of ZZ Top fans around the world, will miss your steadfast presence, your good nature and enduring commitment to providing that monumental bottom to the ‘Top.'” The statement concluded, “We will forever be connected to that “Blues Shuffle in C. You will be missed greatly, amigo.”

Fans were equally as saddened by the news as the former bandmates. “So so sad,” one fan wrote on Twitter. “An icon for sure.” So, what exactly happened to Hill? Read to find out everything we know about the tragic death of ZZ Top’s bassist. 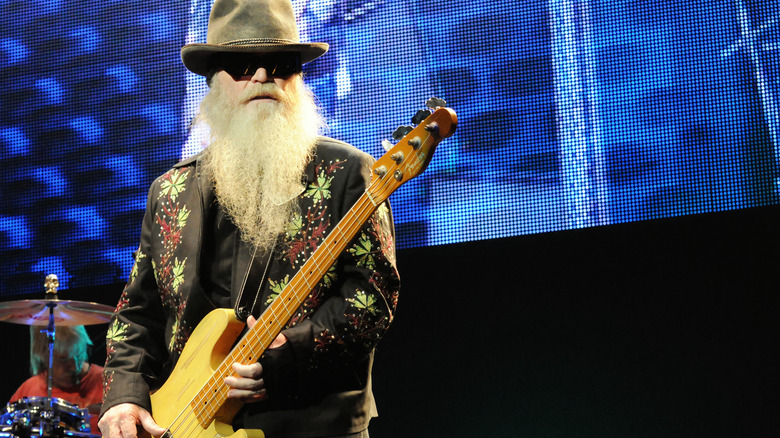 At this point, little is known about the cause of Dusty Hill’s death, but it has been reported that the longtime bassist has been dealing with deteriorating health issues in the days leading up to his death. On July 23, ZZ Top posted an update to Facebook regarding Hill’s health. “The members of ZZ Top, Billy, and Frank, would like to share that Dusty, their fearless Bass player, is on a short detour back to Texas, to address a hip issue. They await a speedy recovery and have him back pronto,” the statement said.

Hill was replaced by Elwood Francis. “Per Dusty’s request ‘The show must go on!'” the statement revealed. “ZZ Top has put the services of Mr. Elwood Francis, their trusted guitar tech of the past two decades, into play with his slide guitar, bass guitar, and harmonica playing in full swing.”

Sadly, Hill never performed with ZZ Top again, as he died a week later. It remains unclear as of this writing whether his hip problem had anything to do with his death.