What’s really going on with Avril Lavigne and Mod Sun (aka Derek Ryan Smith)? The pop/punk singer has had quite the rollercoaster love life in the public eye since she shot to fame in 2002 when she dropped her debut single, “Complicated.” Lavigne then launched a plethora of other major hits on the world, including “Sk8er Boi,” “Girlfriend,” and “What The Hell.”

The star was famously married to Sum 41’s Deryck Whibley from 2006 until 2010, with Lavigne claiming in a deleted statement on her website that they were still on good terms despite their split. “Deryck and I have been together for 6-an-a-half years. We have been friends since I was 17, started dating when I was 19, and married when I was 21. I am grateful for our time together, and I am grateful and blessed for our remaining friendship,” she said (via People).

Proving she has a thing for rockers, Lavigne went on to marry again, this time walking down the aisle with Nickelback’s Chad Kroeger in 2013. The two didn’t waste time, as Kroeger popped the question a mere month and six days after they met (via People). But this one wasn’t meant to be, either. The two went their separate ways in 2015, with Lavigne confirming the news in a deleted Instagram post. “We are still, and forever will be, the best of friends, and will always care deeply for each other,” she wrote (via People).

Now, Lavigne has a new love in her life… 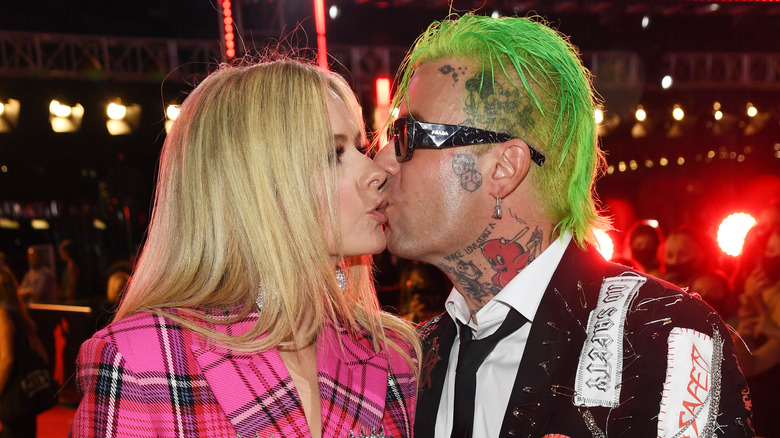 Sign the official couple alert horn, because we have a new celeb twosome confirming their relationship on the red carpet! Yep, Avril Lavigne and Mod Sun made their red carpet debut at the 2021 MTV Video Music Awards on September 12. The two showed off similar looks as Lavigne rocked a pink plaid suit with a large cut-out over her torso and a sparkly bra with black platform shoes. As for Mod Sun? He sported a punk rock look too in a black suit covered in patches over a white shirt and black tie. He also showed off his rocker side with bright green hair and sunglasses.

The twosome’s red carpet walk appeared to do all the talking, but they still talked too. The two chatted with Access, as Mod Sun gushed of his girlfriend, “I’m so lucky to be standing next to an icon.” He added, “I just get to stand next to her and that is the luckiest part of my entire life pretty much,” and they flashed big smiles when the interviewer commented on how cute they looked together. Just in case that wasn’t enough confirmation, the two also planted a kiss on each other’s lips during their night out.

The PDA came a few days after Lavigne called him “my love” in an Instagram tribute, to which he replied, “I love u so much… Ur an absolute icon + the most beautiful thing on this planet.” Aww! 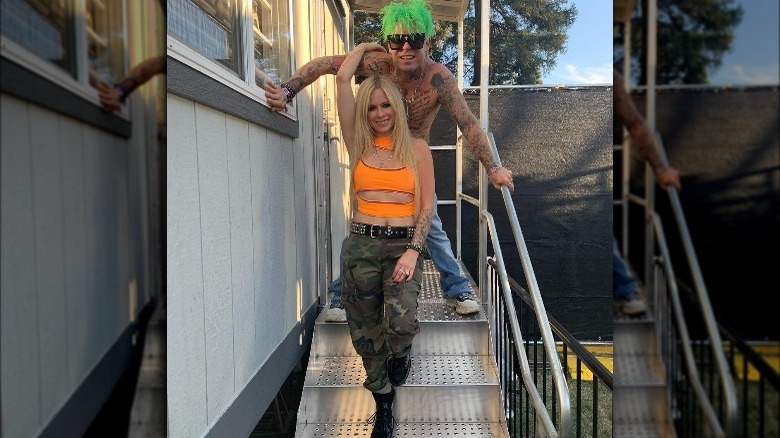 Avril Lavigne and Mod Sun’s official relationship statement came eight months after he gushed about the singer to Entertainment Tonight Canada. “Avril Lavigne has one of my favourite voices in music,” he said as they worked together on her new album and collaborated on his single, “Flames.” Lavigne was clearly equally taken by her collaborator, saying, “Mod and I had an immediate connection from the first day in the studio. He’s an incredible artist and producer. [‘Flames’] is the first of many.”

It seems like things only heated up from there (cue the fire emoji). In February, Daily Mail shared snaps of the two out together, before Daily Mail then published more candid photos of the two on what seemed like a double date with the couple of the moment, Megan Fox and Machine Gun Kelly, in April.

Music producer John Feldman first shared Instagram snaps from the studio with the duo back in December 2020, when the gang looked pretty happy together as they worked on new music. The series of snaps even included a picture of Lavigne sitting on her now boyfriend’s knee as he playfully sat on Feldman’s lap.

Prior to her latest romance, Lavigne was linked to a few famous faces you may have forgotten about, including Brody Jenner and Wilmer Valderrama (remember that!?) But now, we just can’t wait to see more of her and Mod Sun. Rock on!