The BET Awards on June 27 truly had it all: over-the-top fashion, jaw-dropping performances, and even onstage lip locks. The latter came courtesy of singer Lil Nas X, who first commanded attention on the red carpet with a blue and white Cinderella-esque ensemble, as well as a floral pantsuit (via CNN). He then changed into an Egyptian pharaoh outfit for a steamy onstage performance of his megahit “Montero (Call Me by Your Name).” Ever since the song was released in March, it ignited instant controversy for its sexual content and satanic undertones. The music video — which showed Lil Nas X twerking for the devil as he slid down a pole to hell — also coincided with the launch of his infamous “Satan shoes,” which outraged many conservatives.

Therefore, it was surprising that the openly gay singer managed to one-up himself (in terms of shock appeal) as he turned to a male backup dancer and kissed him on stage, all in front of a televised audience! Naturally, it was a divisive move that stirred up various reactions on Twitter. While some, like superstar Diddy, praised Lil Nas X in a post, another users called out the singer for “doing too much.” But Lil Nas X did have one very ardent supporter, and it’s someone who has been in his shoes before, literally. Here’s why fellow gay singer Adam Lambert is speaking out about the BET kiss that got everyone talking. 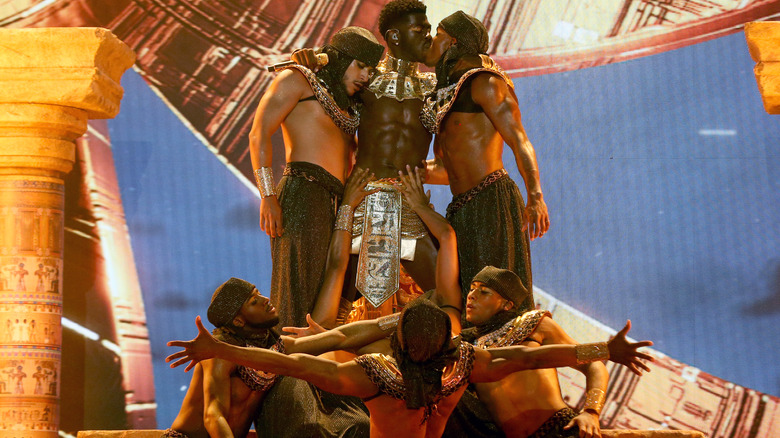 Lil Nas X’s sultry performance struck a chord with many viewers, but perhaps none so much as Adam Lambert. “I thought it was hot,” Lambert told Billboard of the moment Lil Nas X locked lips with a male backup dancer. “I think he is definitely like the gay pop star that is 2021 — he’s bold, he’s controversial, he’s pushing boundaries. That’s what we want our pop stars to do. It’s just taken this long to have it be a gay one.”

But for Lambert, the moment was more than just a cultural breakthrough; it was also deeply personal. That’s because the “American Idol” alum also initiated a same-sex kiss at the American Music Awards, only his came more than a decade earlier in 2009 (per Billboard). And while Lil Nas X was met with a wave of support via social media, Lambert endured the opposite. “I was pulled off of ABC for a little while,” he told Billboard. “They had Christian parent groups writing in, the censors were freaked out.” It therefore makes sense that Lil Nas X’s performance was a milestone moment for Lambert. “He’s so grounded and firm in who he is and what he’s about,” Lambert said of the “Montero” singer. “What I love right now with Lil Nas is we need him to be outspoken about it. He is in a position where that works for him, and he’s using it.”