Jimmy Barnes was on hand for Monday’s Q&A – and he really does work hard to make a living. A simple man, with a heart of gold, in a complicated land. And boy, was he welcome.

For the third week since the election, the big point going forward seemed to be: how on earth did the party that did not win government get all the things wrong that it is not going to be able to implement? What on earth will the opposition do now that it can’t do anything? 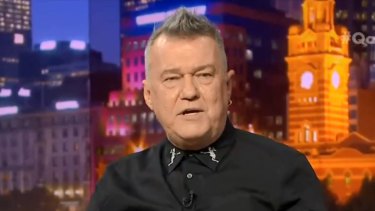 Q&A is here to answer these important questions. The government will apparently take care of itself. And Labor is here to help in this regard, as it always is, as the party ever ready for a serious shit-fight after the event. Preferably televised.

To that end, Q&A had Labor’s perennial smug gadfly Joel Fitzgibbon ready to declare himself the suppository of all wisdom. This is not a typo: Fitzgibbon really does melt and dissolve once inserted.

Here we goes, and here he went: “We were far too complex for the electorate.”

It was not clear whether he was calling the electorate or the Labor Party stupid in his regard – maybe both – but on he went. 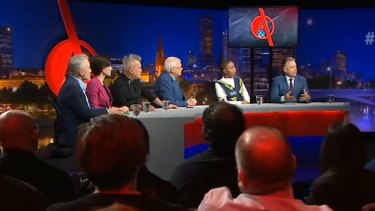 “We were promising too much change at a time when people are feeling insecure in a global world where there is already so much change. And what we needed to offer them was a greater sense of security. More than anything this election was about security.”

So far, so meaningless. But on he went.

“Mainly financial security. People remain very aspirational. The coal miners in my electorate are on about $160,000 a year. They've worked hard and saved hard. Many of them have made an investment in a negatively geared property for example. When we declared that we were going to take from the rich to give to the poor, we forgot to define who the rich are. Many of my coal miners were entitled to think that maybe they're talking about them.”

If non-rich coal miners on $160,000 a year – or anybody else, for that matter – could work out what Fitzgibbon was talking about, more power to them. 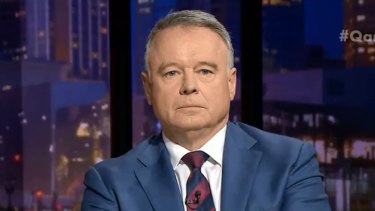 A questioner wondered: “Joel Fitzgibbon, given how vocal you’ve been since the election, did you ever support Labor's campaign policies?”

Fitzgibbon: “I warned my colleagues…”

One will note that, historically, Fitzgibbon has always warned his colleagues. Keep it up, Joel.

Jimmy Barnes was seated next to Nicolle Flint, the beaming member just returned to Parliament in a tight fight for a South Australian electorate, and it was here that the show gained its traction.

Flint was keen to re-prosecute Labor’s franking credits policy, which she declared without challenge a “retiree tax” and also by the way introduced us to a local businesswoman, who was several bouquets removed from the issue at hand: “I think of my florist Amanda, who does a great job and some of her best customers are retirees.” 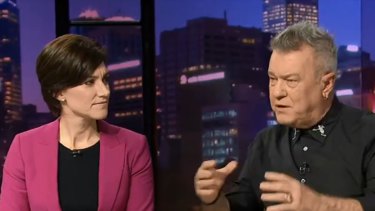 Like Fitzgibbon, Flint waxed lyrical on many subjects without any apparent sensible point: “Very proud Holden owner, third generation Holden owner, my parents my grandparents, both sets, Mum and Dad and grandparents are farmers, and we’ve always owned Holdens”.

Tony Jones questioned if it wasn’t Flint’s own government that killed the car industry. Flint demurred.

Then to the subject of climate change, and electricity supply, and the 2016 Adelaide blackout. “It was a miracle nobody was killed,” Flint declared. “This is the impact of losing reliability of your power supply."

“Wasn’t there also, like, the fact that this was caused by extreme weather?” 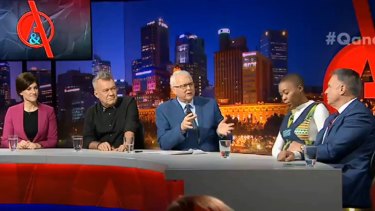 The panel wraps their collective heads around the phenomenon of weather.

Flint: “Jimmy, to be fair, we have extreme weather all around Australia. We have cyclones, all sorts of extreme weather events … entire states’ power supplies do not go down.”

Fitzgibbon: “You’ve got to work it out, mate. When it isn't the weather's fault, it's the Labor Party's fault – always.” 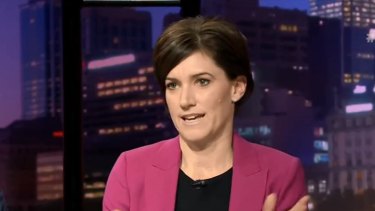 This, let the record show, was the first time one Q&A panellist has addressed another as “doll”.

Tony Jones tried to wrestle back control: “Jimmy – and good on you – you’re taking this into like a great sort of dinner party.”

The old Jimmy would have offered us a drink.

Reformed Jimmy can’t do that, but he could offer us this: “The scare tactics have been brutal. I think it is dishonest. I think it's uncool.”

He thought the Australian people would “see through it”.

And yet, there was a swing to… Peter Dutton?

Barnes: “Because fear. Pure fear. When people think they are being attacked … the difference between a terrorist and refugee. It was rammed down our throats, they were the same, coming to get our jobs, coming to kill us. It wasn’t right. Very, very, very uncool.”

He works hard to make a living.