Matt, 44, was on hand to present the weather forecast for the weekend, speaking with BBC Breakfast hosts Naga Munchetty, 45, and Charlie Stayt, 58. The meteorologist wasn’t in the studio, however, and gave his reports from a Christmas tree farm in Watlington, Oxfordshire. As a result of being outside and trying to link up to the BBC studio, one of the segments was plagued with technical difficulties and therefore, the news anchors had to step in as the line was cut off.

As the presenters handed over the reins to Matt at 10 to eight, it was clear from the offset there were some difficulties with the sound.

Before giving the forecast, the meteorologist spoke with the owner of the tree farm, but viewers couldn’t understand what was being said as the audio kept cutting in and out.

After several minutes, the forecaster was obviously told about the technical issues as he said: “Right, we’re having a few problems at the moment.

“We will come back to the Christmas tree farm shortly and we’re going to hand back to Naga and Charlie,” he continued before the latter stepped in.

With the link to Oxfordshire cut off, the journalist explained: “The problem is just with the sound,” as he urged bosses to keep the camera on the image of the trees. 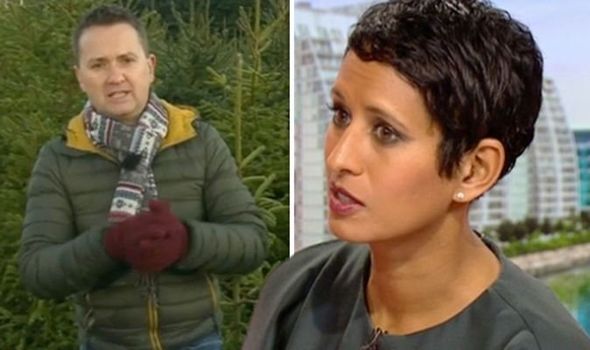 “Don’t worry on a Friday morning. Matt will have the full weather forecast for you,” Charlie told those watching at home.

“We will go back to him in a few minutes and fill in all the blanks,” he added before Naga then carried on with the rest of the show.

Eventually, the forecaster was back on-screen and managed to update viewers about what they could expect from the weather for the final weekend of November.

Jennifer Lopez: I Wasn’t Loving Myself During My Marc Anthony Marriage

Kristin Cavallari & Jay Cutler Post the Same Photo Together
We and our partners use cookies on this site to improve our service, perform analytics, personalize advertising, measure advertising performance, and remember website preferences.Ok