The national treasure fought back both tears and a cold as he collected the 77th Cecil B. deMille Award, which is presented for outstanding contributions to the world of entertainment. 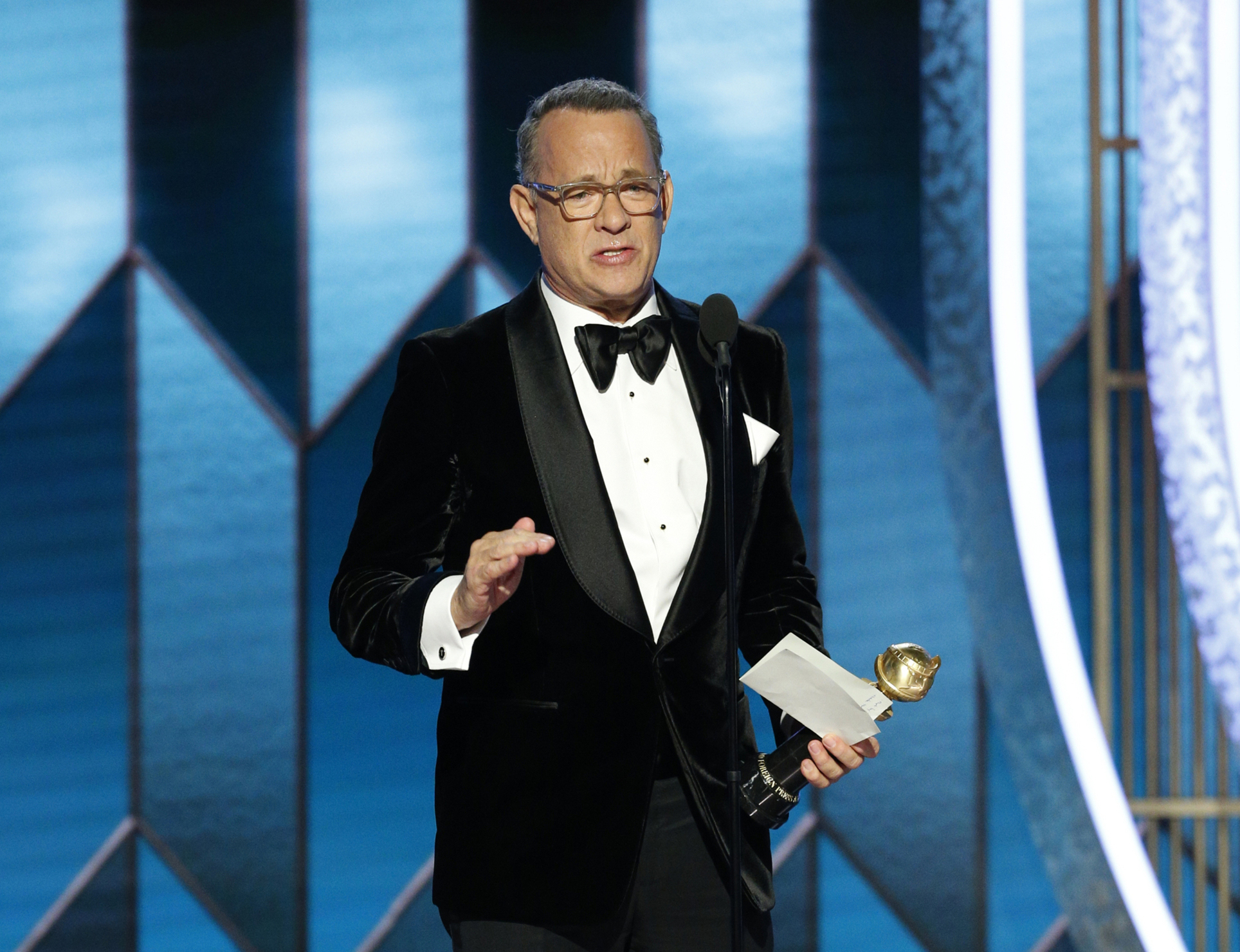 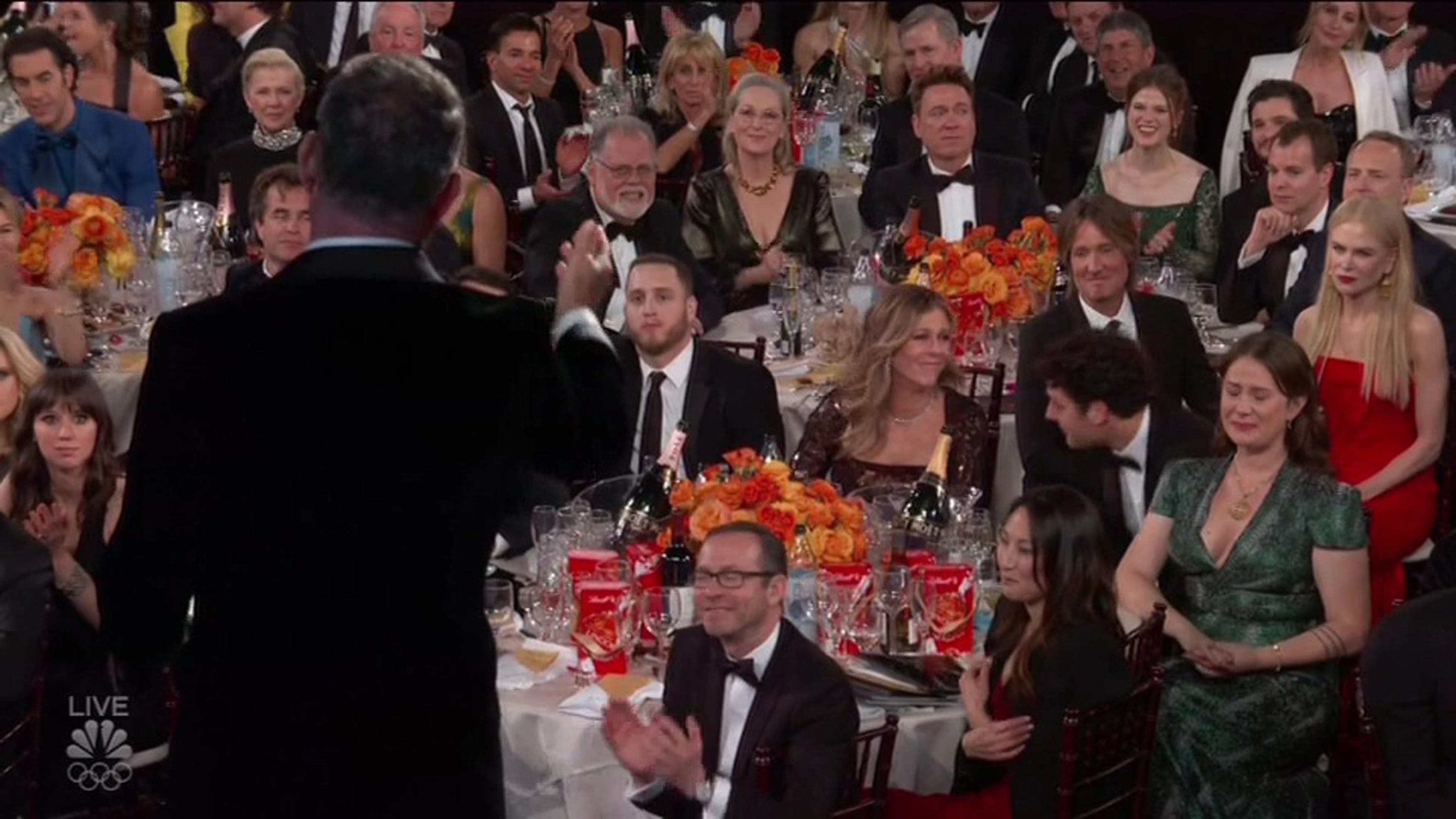 Hanks, a four-time Golden Globe winner, had to compose himself before giving a wholesome speech, which focused particularly on his family.

Around the room at the Beverly Hilton in Beverly Hills, the actor's fellow celebrities looked on admiringly as the star reflected on his incredible career.

Facing his wife, Rita Wilson, who was in the audience, the 63-year-old said: "A man is blessed with a family sitting down front like that – a wife who is fantastic in every way, who has taught me what love is.

Hanks, who has been nominated for a Golden Globe eight times, jokingly blamed his cold for the reason he was choking up.

The beloved A-lister said: "It's the cold that is making this happen. I swear to God, I'm not nearly this emotional at home." 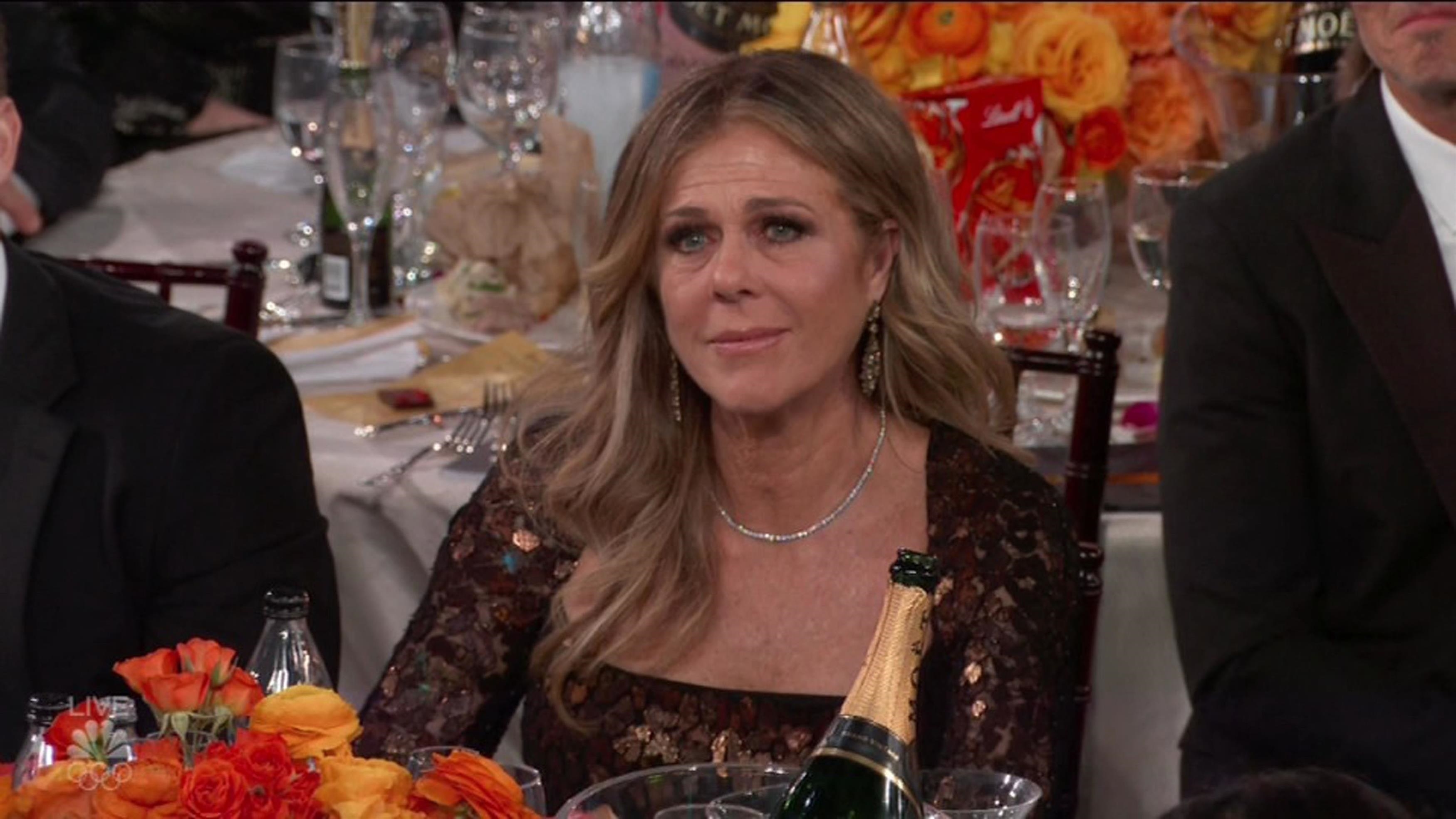 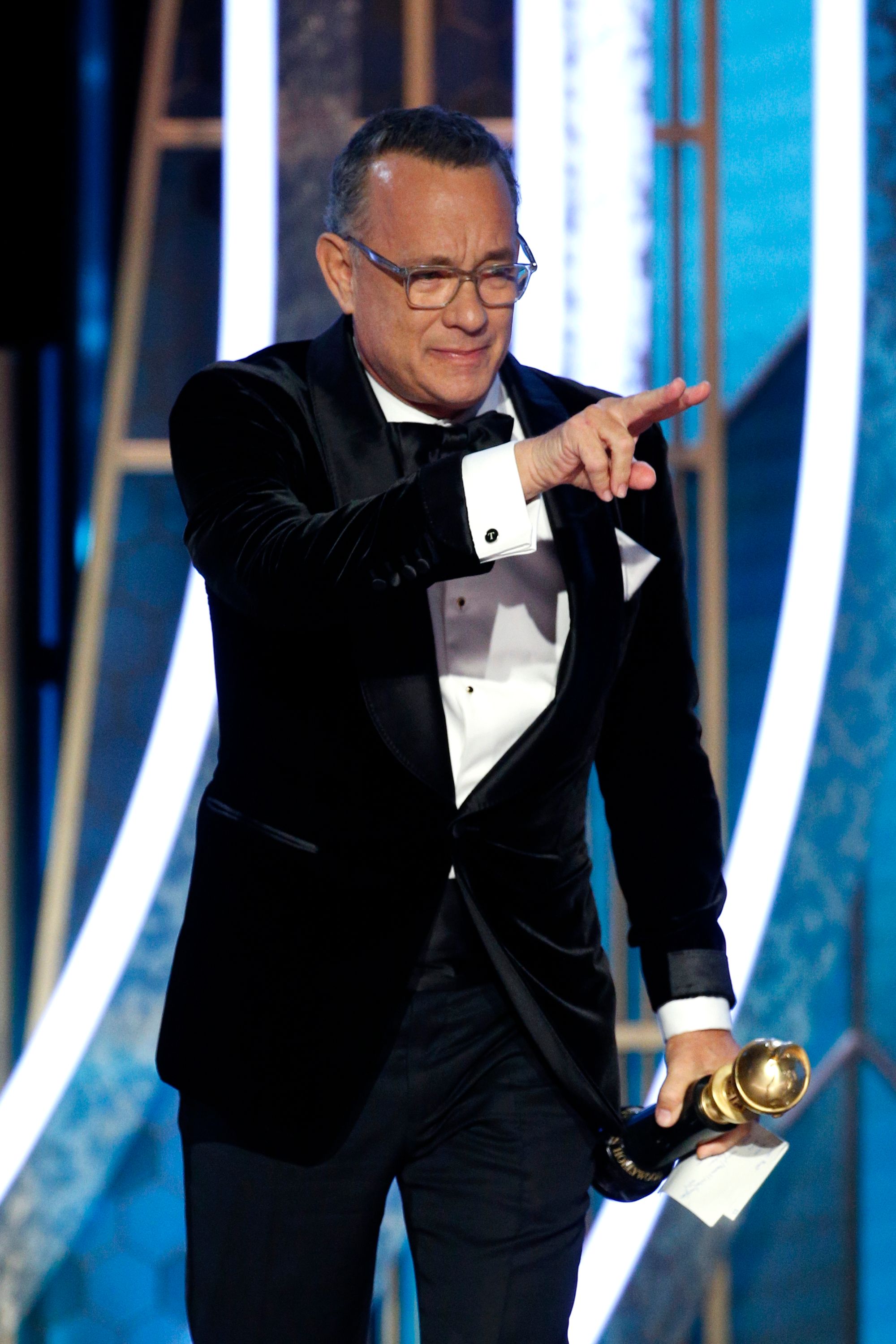 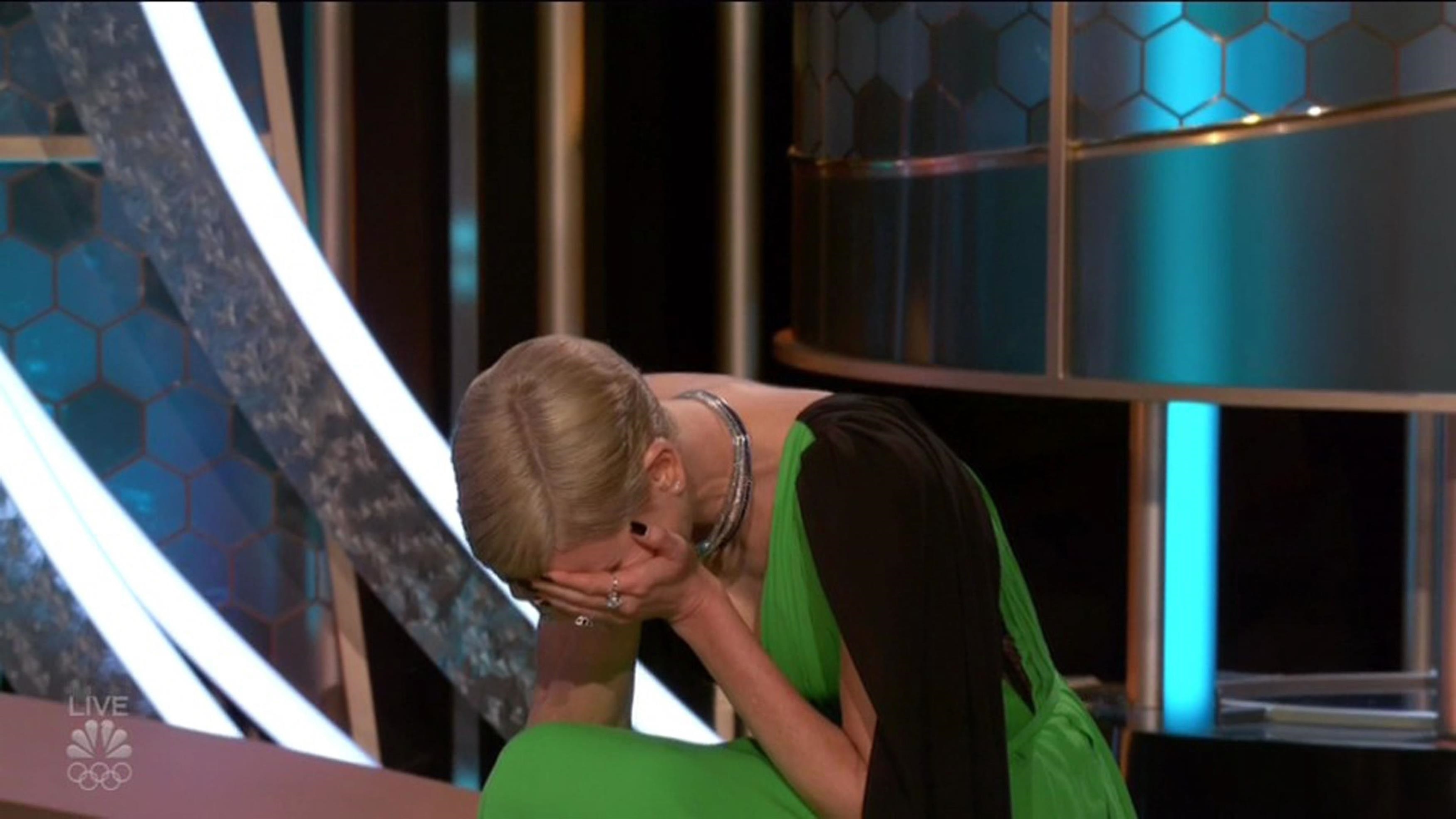 The actor has previously picked up Golden Globes for his roles in Big, Philadelphia, Forrest Gump and Castaway – but he also poked fun at some of his earlier roles.

Following the opening montage, which showcased Hank's past performances, the actor asked the audience: "Tell the truth now. Can I just see a show of hands? How many people in this room have a clip package that includes The Love Boat? Anybody?"

In his speech, he thanked the directors he has worked with over the decade, saying he has "never not been challenged or flummoxed or lost sleep because of the work that of the directors that I've worked with, every single one of them."

The two-time Oscar winner was also nominated for this year's Golden Globe for best supporting actor for his work in "A Beautiful Day in the Neighborhood," where he played TV icon Fred Rogers.

Offering advice for the next generation of actors, Hanks offered a story from when he was an intern at the Great Lakes Shakespeare Festival in the late '70s, his first professional job.

Hanks recalled how he was yelled at by director Dan Sullivan for partying too much and not taking the job seriously enough.

According to Hanks, Sullivan said: "Hey, look, you guys, you actors, you know what your job is? You have got to show up on time and you have to know the text and you have to have a head full of ideas, otherwise I can't do my job."

Hanks added: "That was the greatest lesson a young actor could possibly ever first of all, the head full of ideas.

Bring anything, try anything they might not use it. If it stinks, they won't use it."

He continued: "Showing up on time is one of the greatest liberating acts you can give yourself in a movie.

"That means those people with radios in the ears don't need to knock on your door and say they're ready for you.

By collecting the award, Hanks noted how he now ranks alongside "one name" stars, such as Meryl Streep and Denzel Washington.