Eddie McGuire has taken to the airwaves to describe the moment he sat down to watch the new Adam Goodes documentary, describing the film as both "confronting" and "heartbreaking".

The television and radio veteran, who is also the president of the Collingwood Football Club, features in the critically-acclaimed documentary The Final Quarter thanks to his infamous comments about Goodes and the stage adaption of King Kong. The film debuted at the Sydney Film Festival earlier this year and aired on Network 10 on Thursday evening. 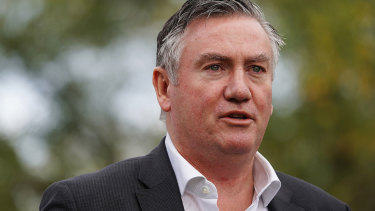 On Friday morning, McGuire fronted his Triple M breakfast show to tell listeners the film gave him "a bit of a kicking".

"It’s very confronting and it’s heartbreaking to be involved in it in a negative way," he said. "I encourage people to watch this documentary. What you have to do in these situations is you have to front up to things. It’s an eyeopener. And if that’s the bottom line, it’s been a worthwhile exercise."

McGuire said there were plans to screen the documentary at his son's school and he would conduct a Q&A session afterwards. He also encouraged people to watch a second documentary on the Adam Goodes saga – from broadcaster Stan Grant – when it comes out later this year.

"I hope it gives us an opportunity to, if it’s applicable to Adam, to get Adam back into the game," he said. "I really want to open up and talk about things and be open to a solution.  We want people to understand … and look after Indigenous footballers."

McGuire's radio co-host, former AFL player Luke Darcy, added: "I feel like as an industry we got it wrong at that time."

The Final Quarter, the latest offering from Australian director Ian Darling, examines the end of Goodes’ celebrated career. The documentary is made-up of archival audio and footage instead of recent on-camera interviews.

The hour-long film touched on McGuire’s widely-condemned King Kong comments as well as the racial slur Goodes copped from a 13-year-old Collingwood supporter. The two-time Brownlow Medallist, who won two premierships with the Sydney Swans and was also named Australian of the year in 2014, was booed at subsequent AFL games and announced his retirement shortly after.

Director Ian Darling has previously said the film is an unflinching look at "what racism looks like".

"One of our greatest footballers, who happened to be Indigenous and a proud Australian of the Year, was literally booed out of the game," he said. "Adam did so much talking over that period – far more than I realised [before starting the documentary]. The problem was that as a nation, we didn’t listen to him. So you can see as the film unfolds how it has affected him so profoundly."

AFL staff have since apologised to Goodes, admitting they did not do enough to "call out" racism and discrimination.