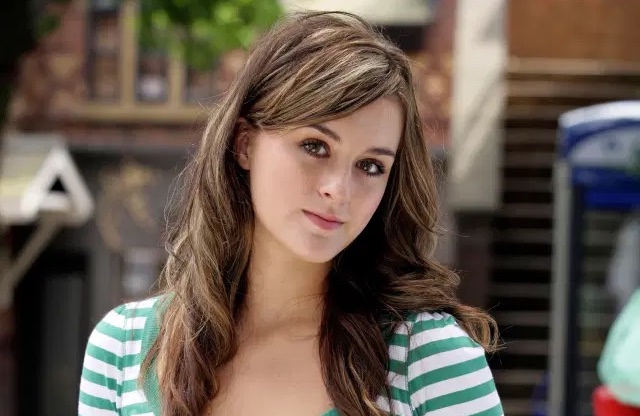 The actress made her first appearance in the Channel 4 soap all the way back in 2005, and would go on to feature in some of its biggest ever storylines.

She was included in the popular ‘McDean’ story, which saw Sarah’s fiancé Craig Dean (Guy Burnet) embark on an affair with his best mate John Paul McQueen (James Sutton), in what is fondly remembered as one of soap’s most powerful narratives.

Craig and John Paul’s affair was later exposed in 2007, when Sarah walked in on the pair kissing on the eve of her engagement party!

Naturally, her engagement party came to an inevitable halt!

The scenes were chaotic to say the least, as a distraught Sarah had to be pulled away as she reined blow after blow on Craig.

The episodes in question were re-aired last year as part of Hollyoaks Favourites, which allowed fans to relive some of the soap’s finest outings from days gone by amid the Covid-19 pandemic.

Following her showdown with Craig and John Paul, Sarah would have relationships with Zoe Carpenter and Lydia Hart.

In 2009, after four-years in the soap, it was revealed that the character would be killed off during a dramatic stunt.

Sarah’s final scenes aired during the second series of late-night spin-off Hollyoaks Later. The character fell to her death in a skydiving accident, after jealous Lydia tampered with a parachute, which Sarah would ultimately use.

Following her Hollyoaks departure, Loui continued to act, and appeared in Doctors in 2015. She also featured in a short entitled Following Footsteps.

The former soap star has somewhat changed direction, as she now performs as one half of singing duo Verity and Violet.

And she regularly updates fans on her work and home life via social media!

Loui is married to former co-star Simon Lawson, who portrayed Simon Crosby in Hollyoaks, and they have two children together.