Although this is just another disturbing sign of how Eve has begun to lose control and good judgment in the face of temptation, Hugo doesn’t seem to mind. Bluemel – who’s also been recently seen as Marcus on “A Discovery of Witches” and Sean in “Sex Education” – had to delve into his character’s psychology to understand why his character doesn’t feel used by this deception.

“I thought a lot about this at the time and I don’t think he’s offended,” said Bluemel in an interview with IndieWire. “He’s clever and … even though he doesn’t know about the earpiece [at first], he knows that she’s only sleeping with him because she’s in Rome and she’s bored and seems a bit stressed out with her life. I think he’s under no illusions of that.

“But at the same time I think there is a real disappointment. What does actually upset him is the slight betrayal of just not knowing. He feels like he has this connection with Eve and that he feels deceived by her,” he added. “It’s almost as if she said beforehand, ‘By the way, I have an earpiece in and I’m listening to Villanelle,’ I think he would’ve gone, ‘Oh, that’s fine.’ If anything, I think he’s a massive fan of the idea of Villanelle and Eve together. He probably would have enjoyed it if he’d known the earpiece was in. He probably would’ve asked for another earpiece.” 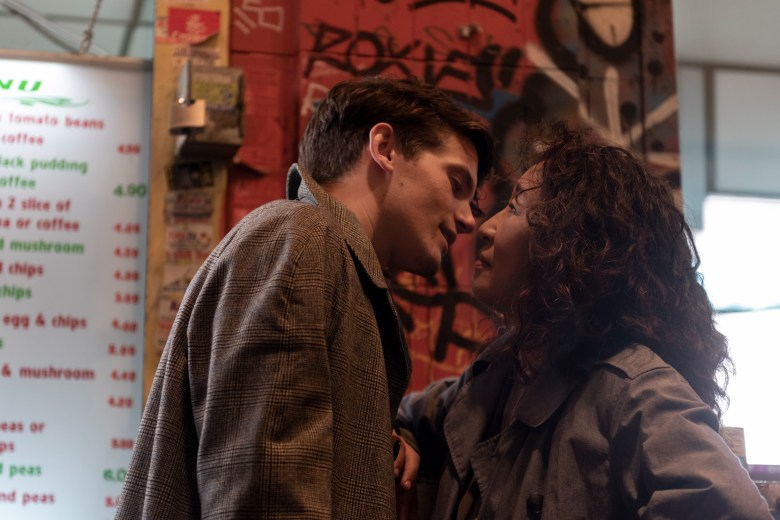 Hugo doesn’t initially appear to be a viable bed partner for Eve when he begins the season. Not only is Eve trying to hold her marriage to Niko (Owen McDonnell) together, but Hugo is the snotty young upstart who’s too sure of himself and makes inappropriate jokes to match that unearned self-confidence. “I really like that the impression that you get is that he’s sort of this quite obnoxious, privileged, entitled posh boy basically who’s walked into the job that he’s got and he’s fully expecting a rise up the ranks really quickly,” said Bluemel. “But he’s very collaborative and incredibly intuitive. He picks up on people’s instincts and on people’s personalities.”

It’s this ability to read people that draws him to Eve, and vice versa. “He’s very perceptive and a really good judge of character. Although he doesn’t always necessarily use this for good. He’s very manipulative and uses people’s weaknesses to his own advantage,” said Bluemel. “It also means that Eve finds this strange, very flimsy connection with him because he’s also not judgmental at all. He’s not necessarily the nicest guy, but he’s definitely very open and happy to discuss the darker side of Eve’s personality with her without really judging. As he says in one of the scenes in Episode 4, ‘I’m exactly the same as you. I do this because I don’t want to be bored.’ Which is a selfish way of looking at it when it’s people’s lives at stake, but I think there’s somewhere down there is a kindred spirit with Eve and is why they connect.”

Playing Hugo has been a blast because Bluemel gets to embody someone who is guileless, even though he is boorish. The audition script had also included a description that Hugo, “though an adult, sort of has the air of the naughty schoolboy about him.” Bluemel could deliver crass lines as Hugo and “at times I’ve had eyes rolled at me. It was a laugh.”

There’s also something charmingly ridiculous about how Hugo sits, slouched very far back and down in his chair. It feels like a calculated overcompensation to appear as if no fucks are given. 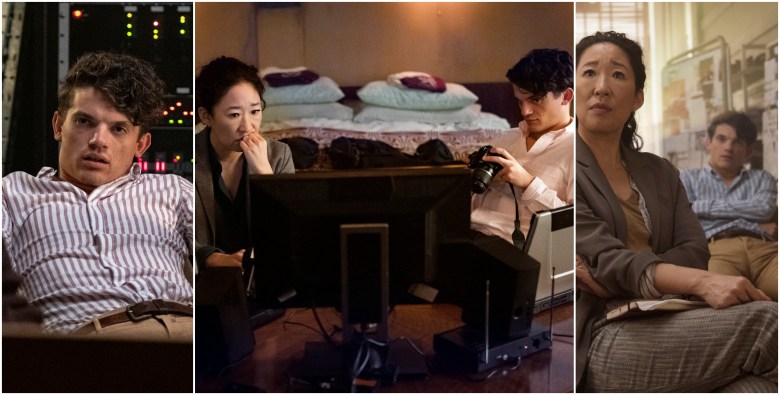 “A lot of Hugo shots are of him propped up. He’s definitely a very keen and passionate man-spreader. So when he sits down, he takes up a lot of space,” said Bluemel. “He’s not big, like me. As he’s grown up, he’s gained little tricks to be the alpha male or the bigger person in the room. And one of them is definitely his use of space. He’s very loose. He’s the sort of person who, like if you let him into your house, he would lie on the sofa straightaway instead of just sitting on the sofa.”

Hugo’s disdain for boredom combined with his bravado amounts to a disregard for danger, despite the risks. The operation in Rome relies on trusting the psychopathic assassin Villanelle to handle another psychopath, tech genius Aaron Peel (Henry Lloyd-Hughes), who has dispatched numerous people already. This is not a winning formula for MI6 even though the operation had been overseen by Carolyn (Fiona Shaw). “He definitely knows it’s dangerous, but he’s a bit like Eve; I don’t think he really listens to people. ‘Yes, it’s dangerous, but we’ll be fine. We’ll be all right.’ He thinks that they can handle themselves,” said Bluemel.

When Eve first thought of her wild scheme for MI6 to hire and then collaborate with Villanelle, all of Eve’s colleagues warned her of the dangers, except for Hugo. 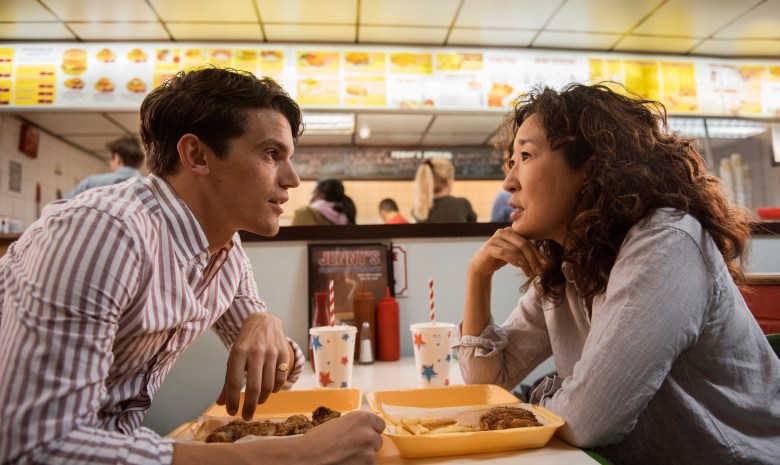 “He’s not very sentimental. He thinks actually, logically, it’s a great way of approaching the situation. Yeah, there might be some collateral damage, but you’ve got to remember with Hugo is so detached from everything — as incredibly privileged people often are — and so sort of unemotional that I think to him it just seems like a bit of fun,” he said. “He’s sort of quite naive and unaware. Hugo is happy to go along with it as long as Eve is happy to go along with it.”

As “Killing Eve” approaches its second season finale, that recklessness could spell their doom. “Eve and Hugo do sort of find themselves in a bit of a dangerous situation. People should definitely be scared,” said Bluemel. “They’ve bitten off a bit more than they can chew by being in Rome. They don’t actually know all the facts. And I think it’s going to be really interesting to see how people react to the last episode.”

There’s another reason to be afraid: Villanelle killed one of Eve’s colleagues in Season 1, and although circumstances are different this year, Villanelle operates by her own rules, as seen by how she dispatches Owen’s schoolteacher friend. If Hugo is near Eve, he could get in the assassin’s way… which might actually delight him.

“Hugo would love to meet Villanelle. He’s terrified of her, and everyone should be. But there was a great scene that was cut in which he said how attractive he thought she was. He’s definitely intrigued,” said Bluemel. “I think he would love to meet her if there was a sort of sheet of glass between them. He’s so not a threat to her that I think actually she would maybe potentially find him quite fun as well just to chat to, but I don’t know if he’d stay alive for that long. If they’ve met, it would be a short encounter, but I think he would do his best to enjoy it as much as possible.”

Watch a sneak peek of the Season 2 finale below: