Lorraine Kelly, 60, was joined by Phillip Schofield, 58, to talk about his new book ‘Life’s What You Make It’. As well as talking about his early days in television in the publication, the This Morning star also discusses how he came out to his colleagues and the interview he held with co-host Holly Willoughby, 38, in January in which he announced to the nation he was gay. Speaking with him on her self-titled ITV chat show on Thursday, the television stalwart admitted she was “very concerned” for him towards the end of last year. 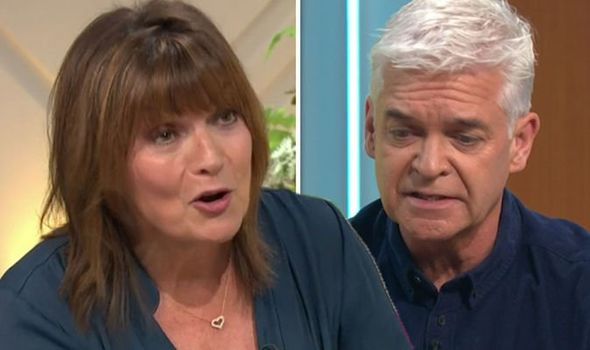 In the candid chat with Phillip, Lorraine said: “I remember seeing you before Christmas and you’d lost so much weight.

“You didn’t look yourself,” she admitted to which the This Morning presenter said he knew people around him knew something was wrong.

“It’s not in my nature to hurt people and I was trying to find my way through it,” he explained before going on to add he spent a lot of time mulling things over.

The Scottish television stalwart then addressed the media reports he and Holly had fallen out behind-the-scenes and said: “I was really worried about you.”

However, the father-of-two revealed at that moment, he and his co-host “couldn’t have been closer” as he told her he was gay.