Since Piers Morgan epically quit Good Morning Britain, speculation has been rife as to who will replace him and co-present with Susanna Reid. Over the past few weeks, the morning news and chat show have had a shake-up in terms of hosts with former partners being split and moved about in a bid to cover Piers’ absence. More recently, Adil Ray OBE has been sitting next to Susanna with Ben Shephard returning to his usual Thursday and Friday slot. Now, it seems, Robert Rinder, also known as Judge Rinder, could be stepping into Piers’ shoes after he was described as a “front runner” for the job.

According to an unnamed source, “a few names have been thrown about online but behind the scenes Rob is still a front runner”.

It comes after his “recent appearances” on the show were apparently “a ‘dry run’” for him to “test the water” and see how he “performs”.

Apparently, “bosses” wanted to find out how viewers reacted to Robert being on the show as they are keen for the “right fit”.

The Daily Star published: “Rob’s management YMU are openly pushing for him to become a full time host alongside Susanna.” 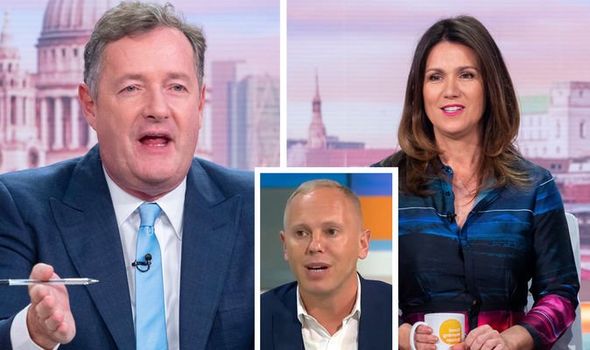 But “nothing has been signed” despite it being made “explicitly clear” that Robert replacing Piers “is the goal”.

Express.co.uk has contacted GMB for comment on the speculation.

Last week, GMB announced Alastair Campbell would be a guest host on the show – although it was insisted he is not replacing Piers permanently.

Alastair took to Twitter to tell his fans the news: “So weird to be wearing suit and tie. Been in at @GMB checking the presenter chair and seeing if I can cope with the tech! 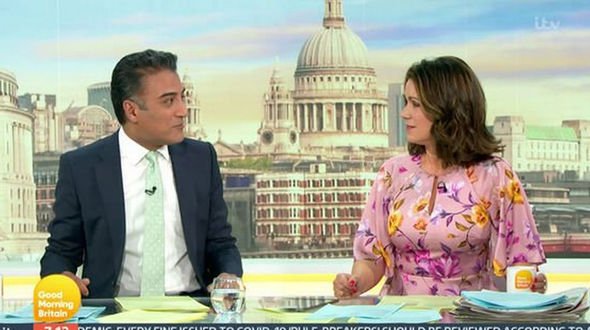 “And no I am NOT the new @piersmorgan BUT I will be presenting alongside @susannareid100 May 10-12 thru Mental Health Awareness Week.”

The writer is former ‘Mind Champion of the Year’ and is an ambassador for several mental health charities too.

“In addition to usual news, views and interviews hoping to draw attention to MH Issues which GMB have long championed,” Alastair’s tweet continued.

“But also keen to get stuck in on all the big political stories post May 6 elections. No piano! Wish I’d been on this a.m!”

Good Morning Britain’s official Twitter replied: “Welcome to the team! We can’t wait for some fiery debates, don’t hold back.”

There have also been reports Richard Madeley is set to sit in Piers’ old chair in June.

The former This Morning presenter said on the possibility: “If the phone went and they said: ‘Would you come in and talk?’, of course I would talk to them. It would be bonkers not to.

“But I very much like sitting in for people,” he told Metro.co.uk. “I have all the fun and very little of the responsibility or flak.”

He was also asked whether he could handle the abuse Piers used to receive when presenting GMB.

“I personally couldn’t give a [expletive]. Far too many younger presenters have been affected by Twitter and cowed by it.

“I remember when I started sitting in for Piers on Good Morning Britain, I’d have a look at Twitter after I’d done a programme and, yes, you get some nice comments but you also get horrendous abuse and, from time to time, death threats.”