The good news out of CinemaCon 2021: Theaters survived. Tireless lobbying efforts by the National Association of Theater Owners and the Motion Picture Association funneled government support to furloughed and laid-off workers as well as mom-and-pop theaters. It kept the doors open for 42,000 out of the 43,000 total screens in North America.

At a CinemaCon press roundtable, NATO CEO John Fithian admitted that he feared losing half that number. “That’s a miracle,” he said, “a tremendous success story. Some cinema companies couldn’t make it through some bankruptcy filings, fewer than we thought. I’ve lobbied [for exhibitors] since September 1992, but I’ve never been as encouraged by this industry coming together to save movie theaters.”

The bad news: Day-and-date releases boosted piracy all over the world. As pristine copies hit the internet almost instantly, that impacts studios as well as theaters. That may lead to more exclusive runs, but not the old ancillary windows. They will never go back to what they were.

Hollywood is now a business that offers a dizzying array choices for each movie. As anxiety-wracked distributors and exhibitors track COVID flare-ups around the globe  — India, home of the Delta variant, swiftly bounced back, while Peru finally reopened after 18 months of shutdown — things are returning to something approaching “normal,” even if the box office has a long way to go.

“The film business has stabilized and is starting to come back again,” said Paramount distribution chief Chris Aronson, who showed exhibitors 13 minutes of “Top Gun: Maverick” as well as Tom Cruise repeatedly sailing over a cliff on a motorcycle in behind-the-scenes footage from the latest “Mission: Impossible” sequel. “But there has to be new way of thinking. The business has to reinvent itself. It’s not just a question of getting content back. We have to earn people’s willingness to come back. It starts with content, but it’s not just about content.”

The industry “should learn how to live with Covid, not run away from it,” said Mooky Greidinger, CEO of Regal owner Cineworld. On a CinemaCon International panel, he acknowledged that it will take time to return to the global $42 billion heights of 2019. While the convention built rah-rah excitement for movies like Paramount’s “Top Gun” sequel to Warner Bros.’ sci-fi spectacle “Dune,” the challenge for theaters is getting the message out.

According to various studies, going to cinemas is the safest destination outside the home. A group of people who sit masked, motionless, and silent as they face one direction sees far less viral transmission than congregating at restaurants, sporting events, or churches and synagogues where talking, singing, or yelling may be involved. Messaging to consumers and building confidence in movie safety is the top priority.

Exhibitors’ and distributors’ joint search for solutions forced them to improve their communication. Studio bosses, who take their cues from Wall Street, lean toward streaming. Outspoken Warners’ critics Chris Nolan, Denis Villeneuve, and Patty Jenkins — who told a panel she hopes to “forever” avoid seeing another one of her movies stream day-and-date — and many other filmmakers want to make deals that lean into theatrical. (In 2022, Warners movies in theaters will retain a 45-day window; others will go straight to HBO Max.)

For the industry to bounce back, theaters and studios have to reckon with reality rather than buy into convenient fiction. As always, much of what was on display at CinemaCon was wishful thinking. 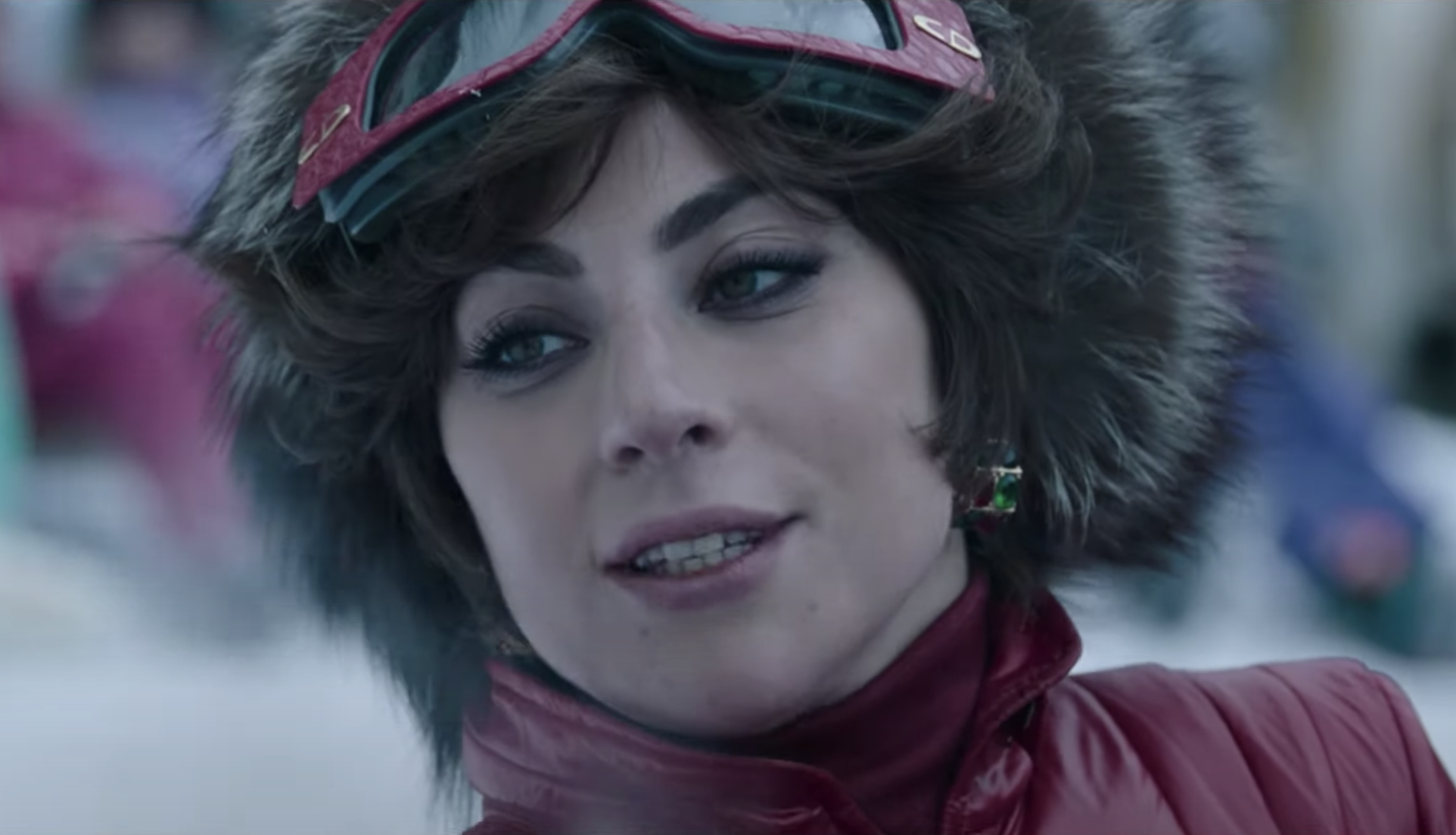 Lady Gaga in “House of Gucci”

Fiction: MGM’s theatrical love-fest and newfound status as purveyor of auteur cinema could make it an exhibition savior.
Fact: If a streaming-focused tech-giant winds up in the driver’s seat, all bets are off.

“Thank God for each and every one of you,” MGM chairman Michael De Luca told theater owners and managers at his studio’s CinemaCon presentation Thursday.

“We held our movies for you,” film chief Pamela Abdy cooed.

Among this was no mention of the $8.45 billion elephant in the room: Amazon’s pending deal to acquire the studio.

In the months since the deal was announced in May, De Luca and Abdy have embarked on a PR campaign to highlight their recent strategy of “treating the filmmakers like the franchise,” as De Luca told the New York Times. That narrative seems completely at odds with Amazon’s interests — per executive chairman Jeff Bezos, Amazon wants MGM for a “very simple” reason: a vast catalog of IP that can be redeveloped.

There’s a reality chasm between MGM and its soon-to-be corporate overlords, a company that had largely turned its back on theatrical before the pandemic. Here, NATO sees things with appropriate skepticism: There’s a fox in the henhouse.

Fithian told AFP that Amazon’s entertainment strategy is about driving people to subscribe to Amazon Prime, not head to theaters. NATO now plans to work with Congress and regulators to find ways to deploy antitrust laws to preserve competition and choices for movie consumers.

“Amazon is buying one of the most storied brands in our history, with a gigantic library,” said Fithian at a press roundtable. “They’ve got a phenomenal slate of movies designed for theaters. We’d like to make sure those movies keep coming to theaters.”

Fiction: As the only major studio without a streaming service, Sony made a bold statement about its faith in the future of theatrical.
Fact: Sony plays both sides — to excellent results.

NATO chose Sony to open up this year’s CinemaCon — recognizing that the studio’s status as the only major without a streaming service, and only one that hasn’t experimented with day-and-date releases — could evangelize in the crusade against hybrid releases. Sony Pictures Chairman Tom Rothman’s F-bomb? Just the thing NATO dreams are made of.

Shock value aside, another reality presents itself: Sony straddles the same shareholder-pleasing, theatrical-streaming line as its peers, with a twist.

In an earnings call earlier this month, Sony CFO Hiroki Totoki pointed to the slow box office rebound and continued uncertainty for theatrical. “Given these circumstances, we are taking a flexible approach to our release strategy for films that are ready to be introduced to the market so as to maximize long-term value of those works,” he said. “For example, while we decided to further postpone the theatrical release of major films like ‘Venom’ and ‘Hotel Transylvania: Transformania,’ we decided to license to video streaming services the films ‘Cinderella’ and ‘Vivo,’ which were originally scheduled for theatrical release.”

In other words: Sony got through the pandemic just fine without theaters and recognized that not everything is worth a theatrical release. “Spider Man: No Way Home”? Absolutely, but even if its box-office performance leaves Sony wanting more, it has money in the bank by licensing its theatrical slate to Netflix and Disney.

Fiction: Arthouses are going out of business as adult moviegoers stay away from cinemas.
Fact: They’re still standing.

For the first time, NATO welcomed many non-profit arthouses and helped protect them when the pandemic hit. And in a moment of fortuitous timing, soon indie theaters will no longer have to deal with the virtual print fees needed to make the transition to digital. There will be no more P in P&A (prints and ads). At CinemaCon, two specialty distributors showcased strong fall slates, from Neon Palme d’Or winner “Titane” and biopic “Spencer “(which could yield Kristen Stewart her first Oscar nod), to Focus Features’ big-budget Viking flick “The Northmen” from Robert Eggers.

“We need to preserve art houses and come out strong as they find flexible release models,” said Fithian at CinemaCon. “We have to accommodate specialty film.”

“Shang-Chi and the Legend of the Ten Rings”

Fiction: “Shang-Chi and the Legend of the Ten Rings” is a hopeful sign for future exclusive theatrical releases from Disney.
Fact: Disney says the release plan for the MCU installment is an “interesting experiment.”

Rising virus cases took the blame when Disney announced it would screen “Shang-Chi” instead of staging a presentation. But given CinemaCon’s stance on hybrid releases, Disney would have faced an awkward reception.

Exhibitors have plenty of reasons to be excited for the film’s September 3 release. It will be Disney’s first MCU film released exclusively in theaters since “Avengers: Endgame” back in spring 2019, which broke box-office records with a $2.78 billion worldwide gross.

Theaters need Disney far more than it needs them, a power imbalance so severe the studio didn’t show for what NATO viewed as a convention that will keep the future of entertainment from tilting off its axis. Instead, it screened “Shang-Chi,” which has a release strategy that CEO Bob Chapek termed an “interesting experiment:” It’s the studio’s first foray with an exclusive 45-day theatrical window. For theaters, “Shang-Chi” represents the best-case scenario for the industry’s future.

The hybrid release of “Black Widow” may have drawn the ire of NATO and prompted a lawsuit from star Scarlett Johansson, but for Disney the $80 million opening weekend last month (split with theaters), coupled with an additional $60 million from Disney+ rentals (not split with theaters) was a success.

Disney churns out billion-dollar movies with more frequency than anyone. If it decides against a future forged in that image, theaters face an even bleaker future. For Disney, that would be — as Chapek termed it, much to “Shang-Chi” star Simu Liu’s offense — just another “interesting data point.” Sorry, Liu, it’s just business!