THEY are gangster-film icons who have joined forces in what critics are calling the ultimate mobster movie.

Robert De Niro, Al Pacino and Joe Pesci, with a combined age of 231, make up the Hollywood holy trinity in The Irishman — directed by the legendary Martin Scorsese. 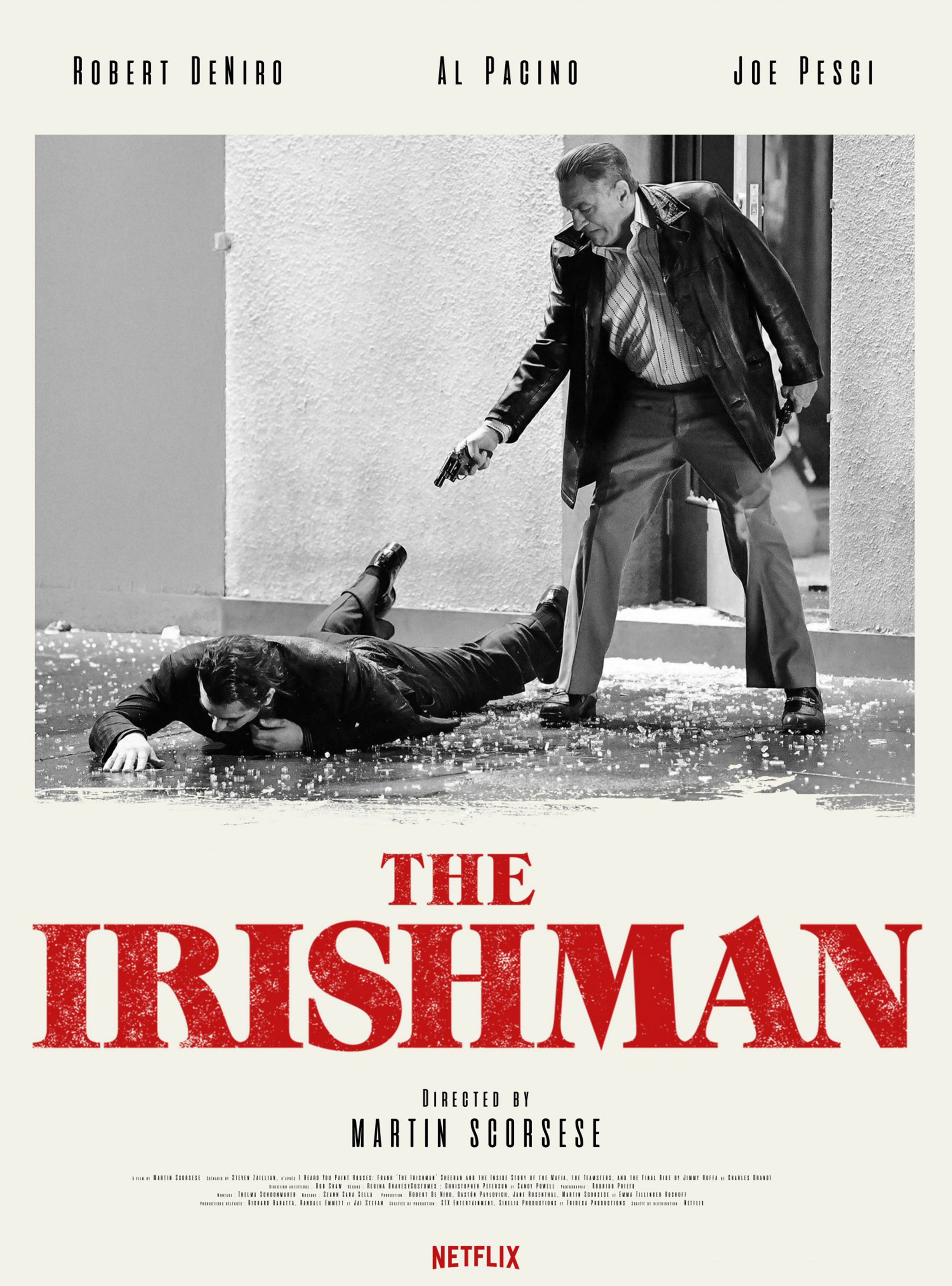 It is a film of epic proportions: 12 years in the making and a bum-numbing three-and-a-half hours long. And at £110million, so big that most studios refused to make it.

It was down to streaming service Netflix to fork out for the story about real-life mobster assassin Frank “The Irishman” Sheeran.

Last night De Niro, 76, Pacino, 79, and director Scorsese, 76, were on the red carpet at The Irishman’s London premiere.

The film is based on 2003 book, I Heard You Paint Houses, written by Sheeran’s lawyer Charles Brandt. 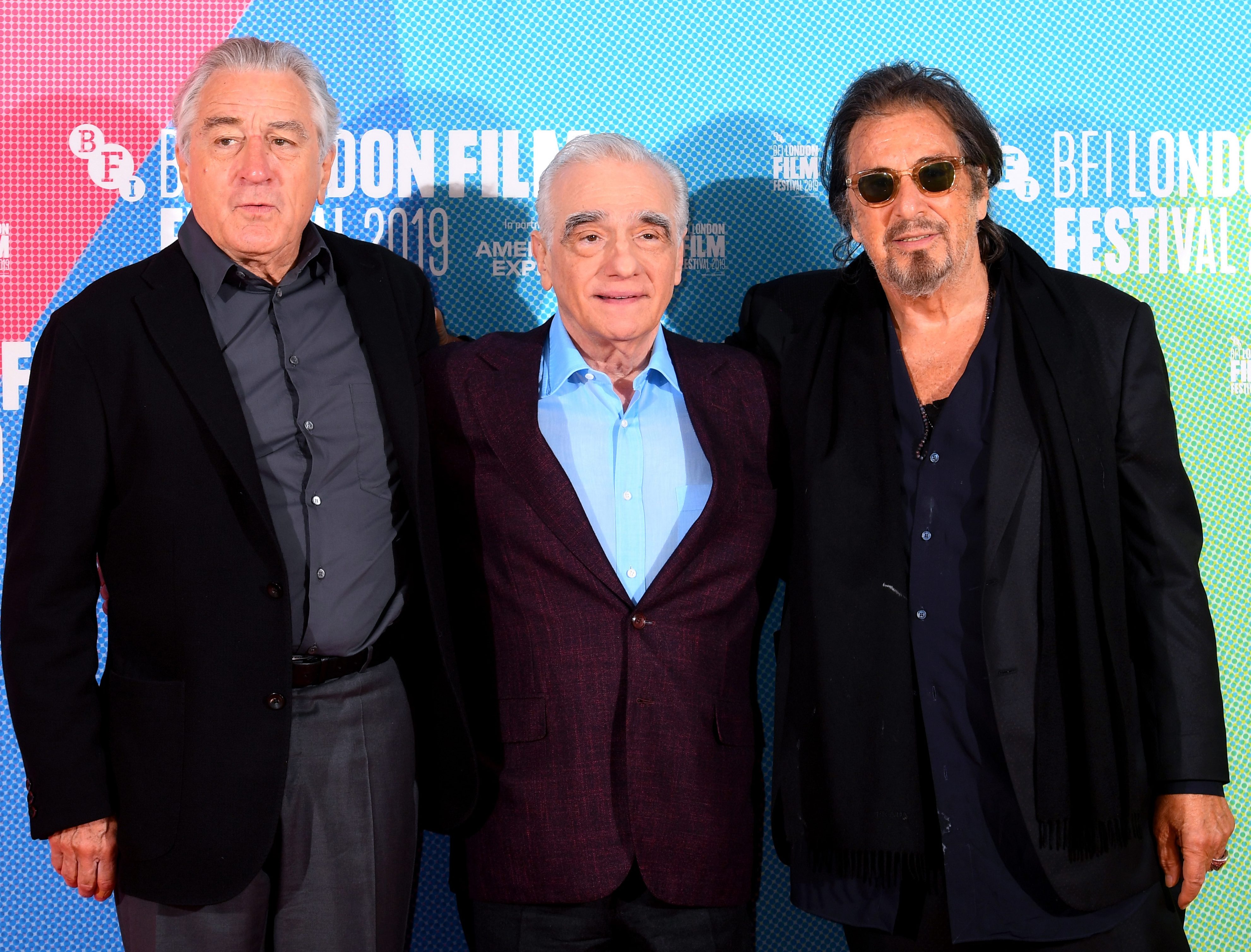 Among other murderous tales, it recounts Sheeran’s role in the suspected killing of corrupt US union boss Jimmy Hoffa, played by Pacino.

It was De Niro, who takes the title role of Sheeran, who f suggested the project to Scorsese. The actor revealed: “I said, ‘Marty, you should read this book, because I think maybe this is what we should try and do’. We started this whole process in 2007, so it’s been a long time coming.”

The pair also thought of Scarface actor Pacino right from the start. De Niro added: “Then it was a lot of toing and froing and a matter of waiting for everyone to be able to do it.”

Pacino said of the film: “It’s Bob and Marty in a world they understand, have researched and know better than anybody.” 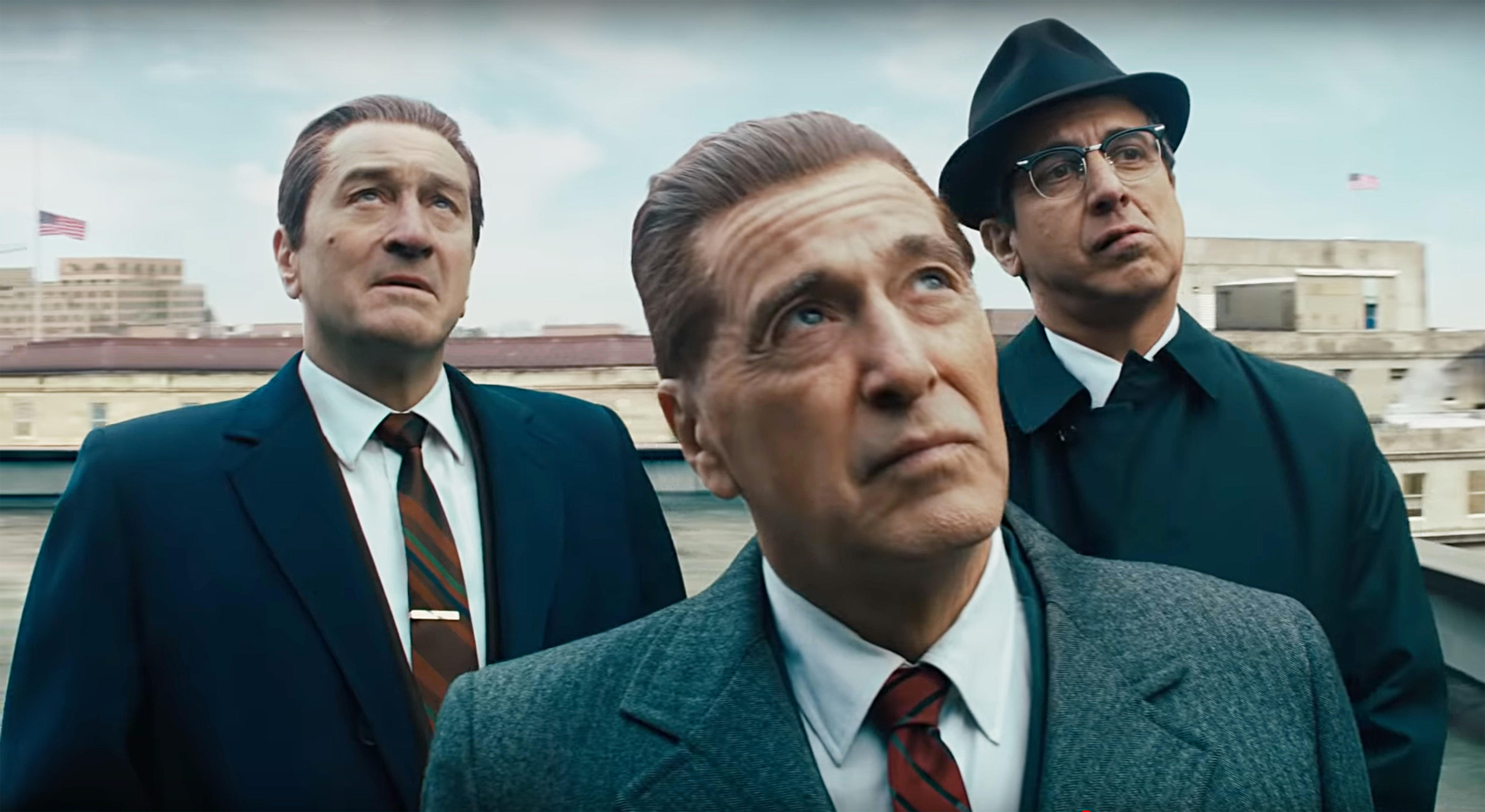 But convincing Goodfellas and Casino actor Pesci, 76, to take part as crime boss Russell Bufalino was not nearly as straight forward, because he kept hanging up his phone.

De Niro finally convinced his old buddy to come out of unofficial retirement and jump on board for the project, which also includes Harvey Keitel, 80.

He told him: “Who knows if we’ll ever have the chance to do this again. We won’t, so come on, let’s just do it.”

De Niro added: “There was a lot of talking but he loves Marty and I think he loves me, so he said, ‘Let me do it’.” 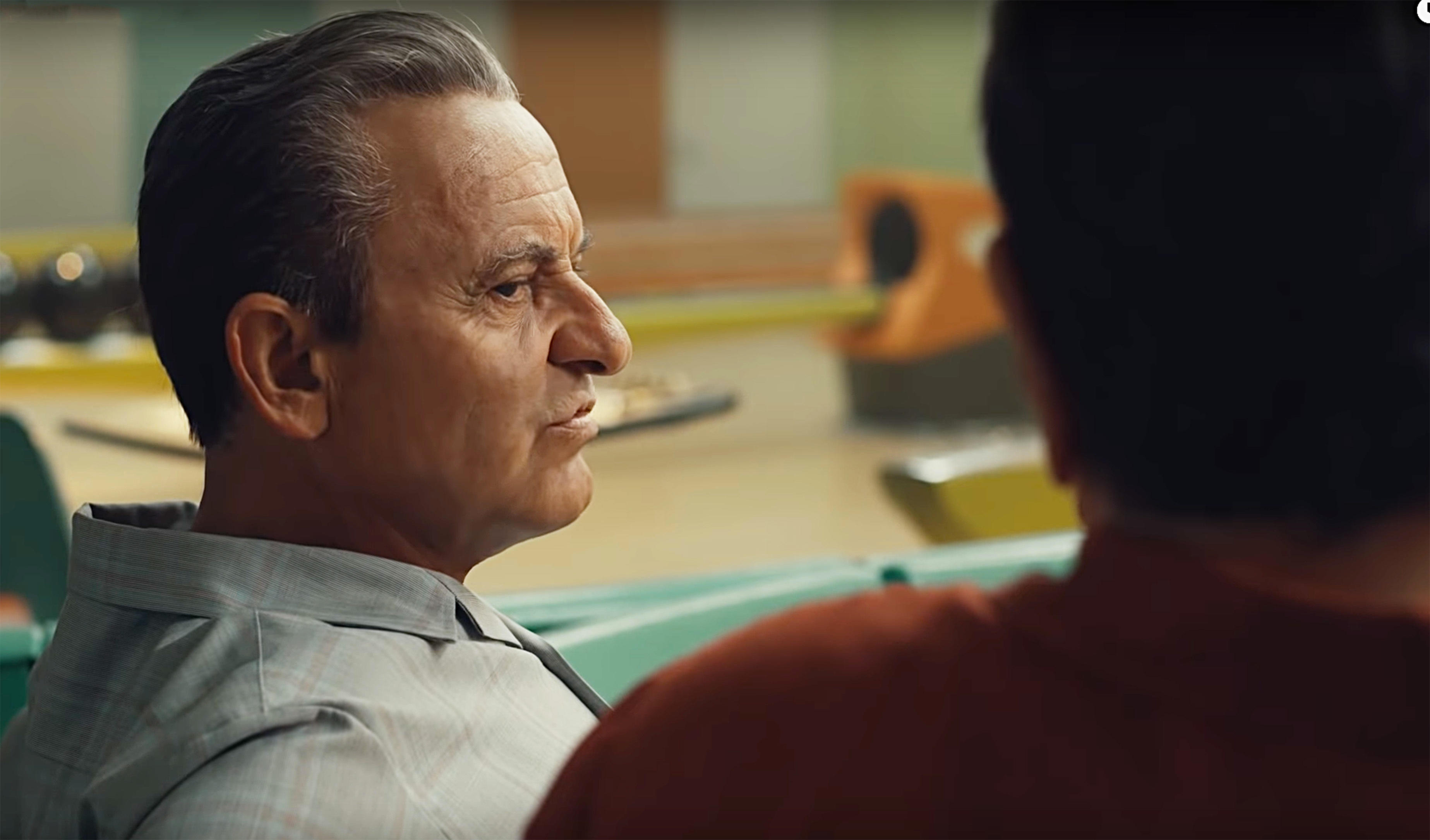 Between them, the three main actors and Taxi Driver director Scorsese are responsible for billions in box office sales.

And with one the greatest line-ups ever, there was never any question of finding actors to play the younger versions of their characters in flashback scenes.

Instead, CGI was used to “youthify” them with digital de-aging, a big chunk of the high production cost.

Scorsese, who was also behind Wolf Of Wall Street and Boardwalk Empire, said: “When I make a picture with De Niro and Al and Joe, I didn’t want to work with actors pretending to be them younger. Half the picture I’d have to explain to them who Frank Sinatra is.” 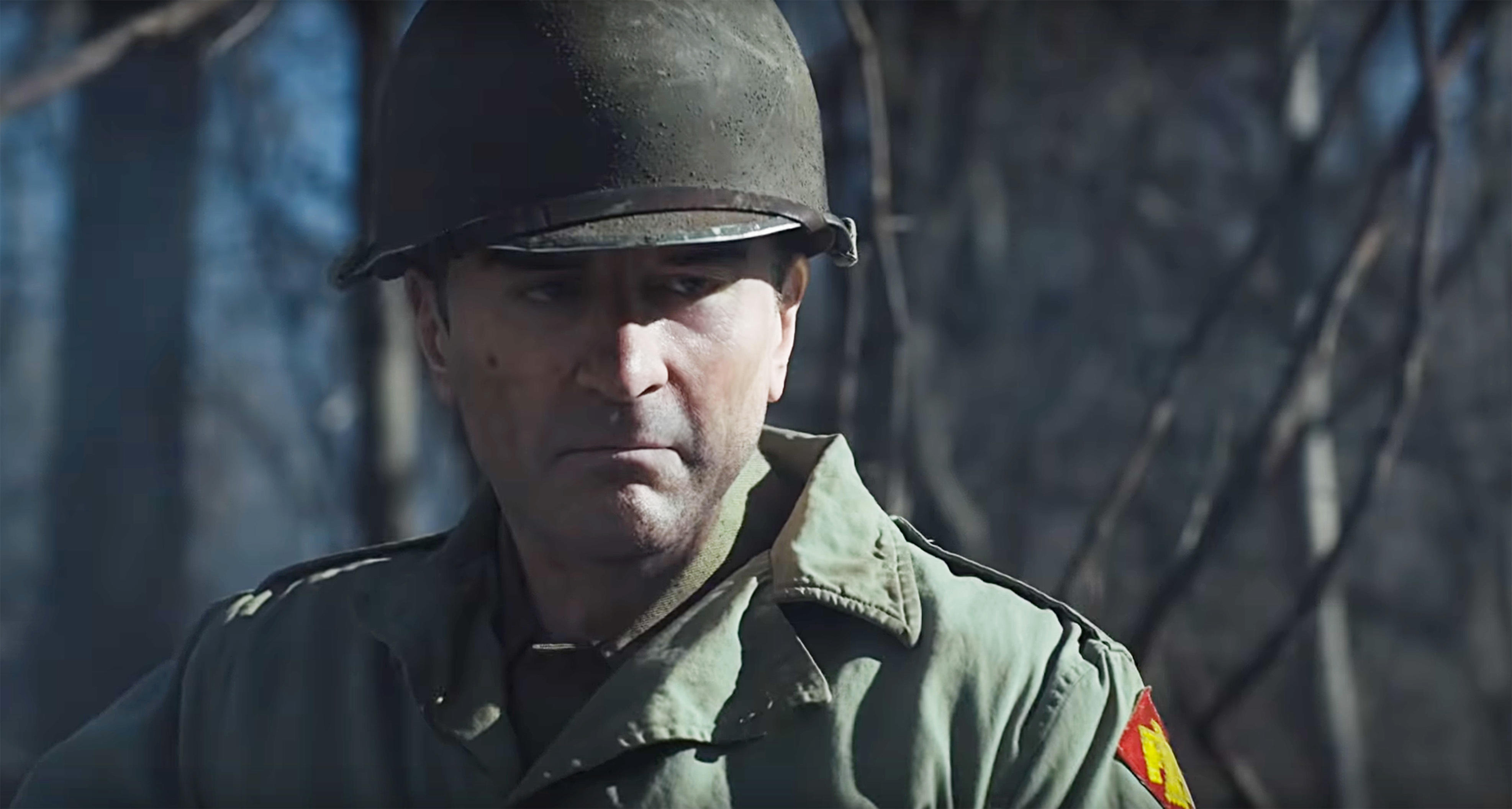 Painstaking attention was given to every line and facial expression to make sure the characters looked youthful.

The story of Mafia hitman Sheeran certainly has everything a good gangster movie could ask for. The notorious killer is believed to have been behind 25 gangland slayings, including Hoffa, who became embroiled with the Mafia in the Seventies.

Hoffa went missing in 1975 and his body was never found. 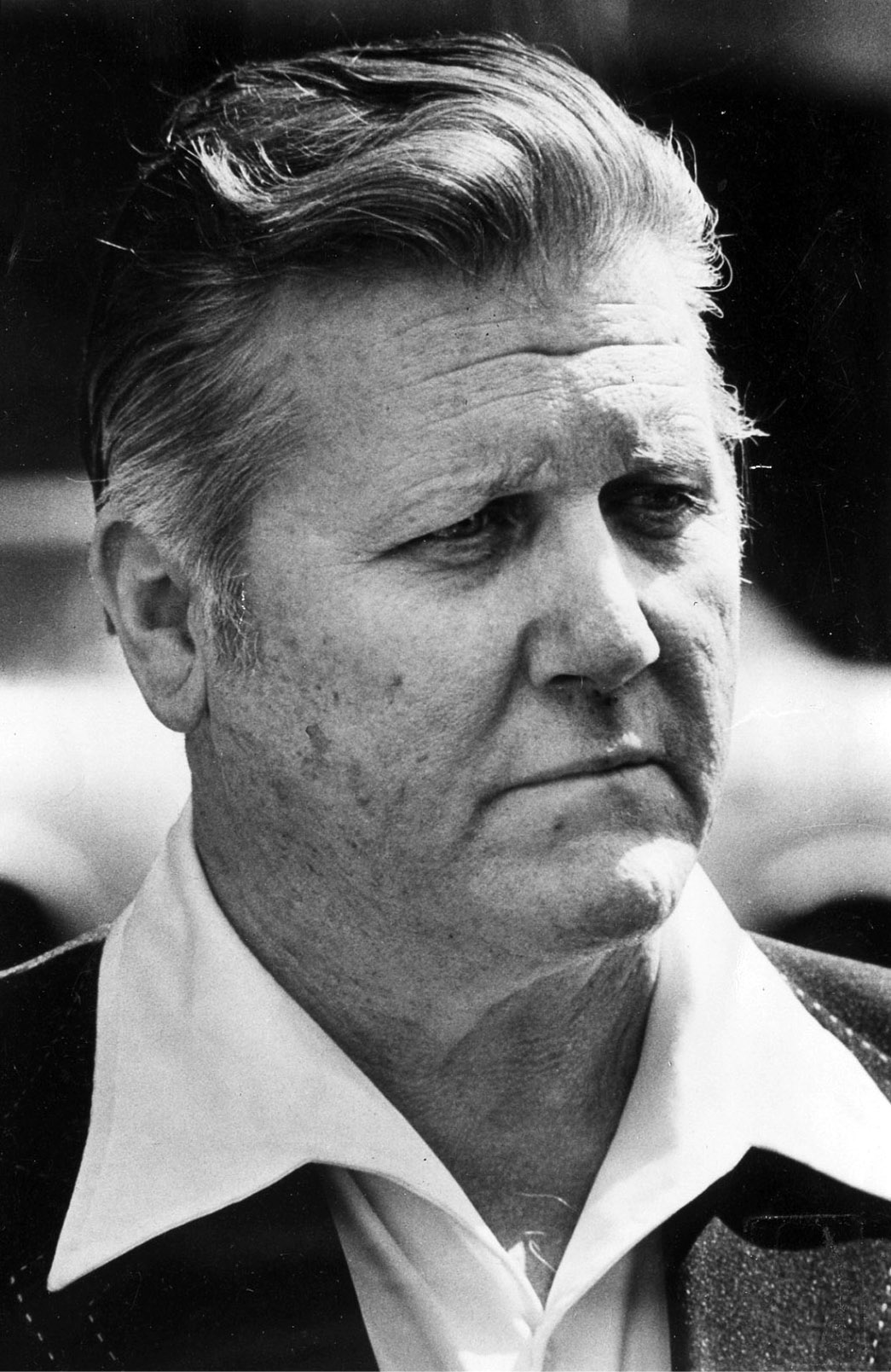 Sheeran was born into a working-class family in Pennsylvania in 1920. His dad was Irish and mum Swedish.

At 6ft 4in he joined the army when he was 21 and saw action during the Second World War in Germany, France and Italy, clocking up 411 days of combat duty. 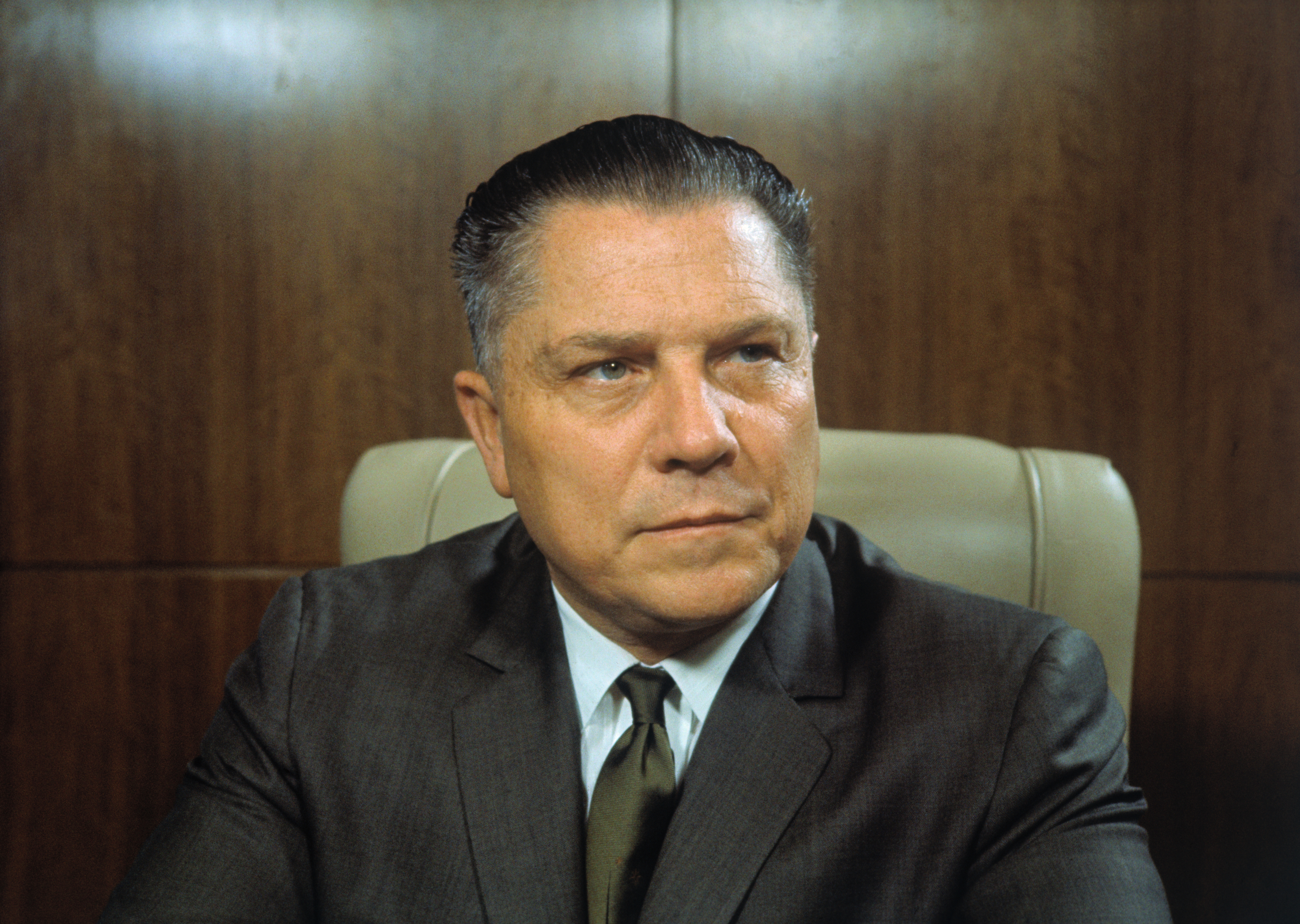 It was said that during this service that he developed his taste for killing.

He was also prone to go awol, which he recalled was “mostly spent drinking red wine and chasing women”.

Sheeran, who as a child would fight other kids for money, told author Brandt how he relished being involved in massacres, revenge killings and summary executions.

He said his first Mafia hit felt like his time in battle, saying: “It was just like when an officer would tell you to take a couple of German prisoners back behind the line and for you to ‘hurry back’. You did what you had to do.” 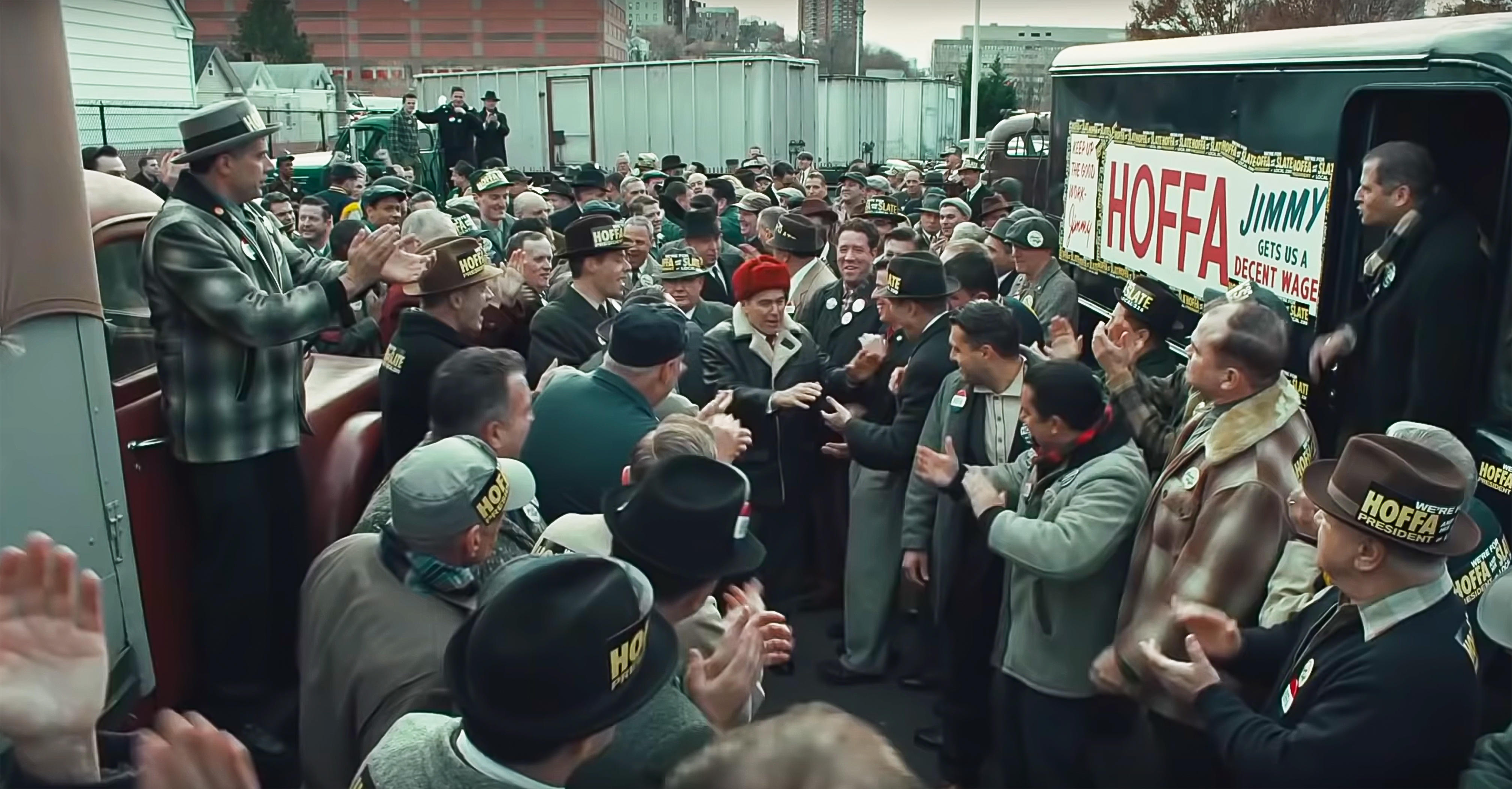 He was discharged at the end of the war and got close to the mob by becoming an associate of crime family head Bufalino, known as “The Old Man”, who he met while working as a loan shark.

Sheeran, a father of four, was also an accomplished dancer, having won competitions and even gave dance lessons before the war. Bufalino, who oversaw rackets up and down America’s East Coast, is said to be the inspiration for Marlon Brando’s Godfather character.

Sheeran sharpened his skills as a henchman working for Bufalino as driver and “muscle”, striking fear into his community.

His speciality was to pose as the driver of a broken-down truck and ask to use the toilet at the premises where he had a target. 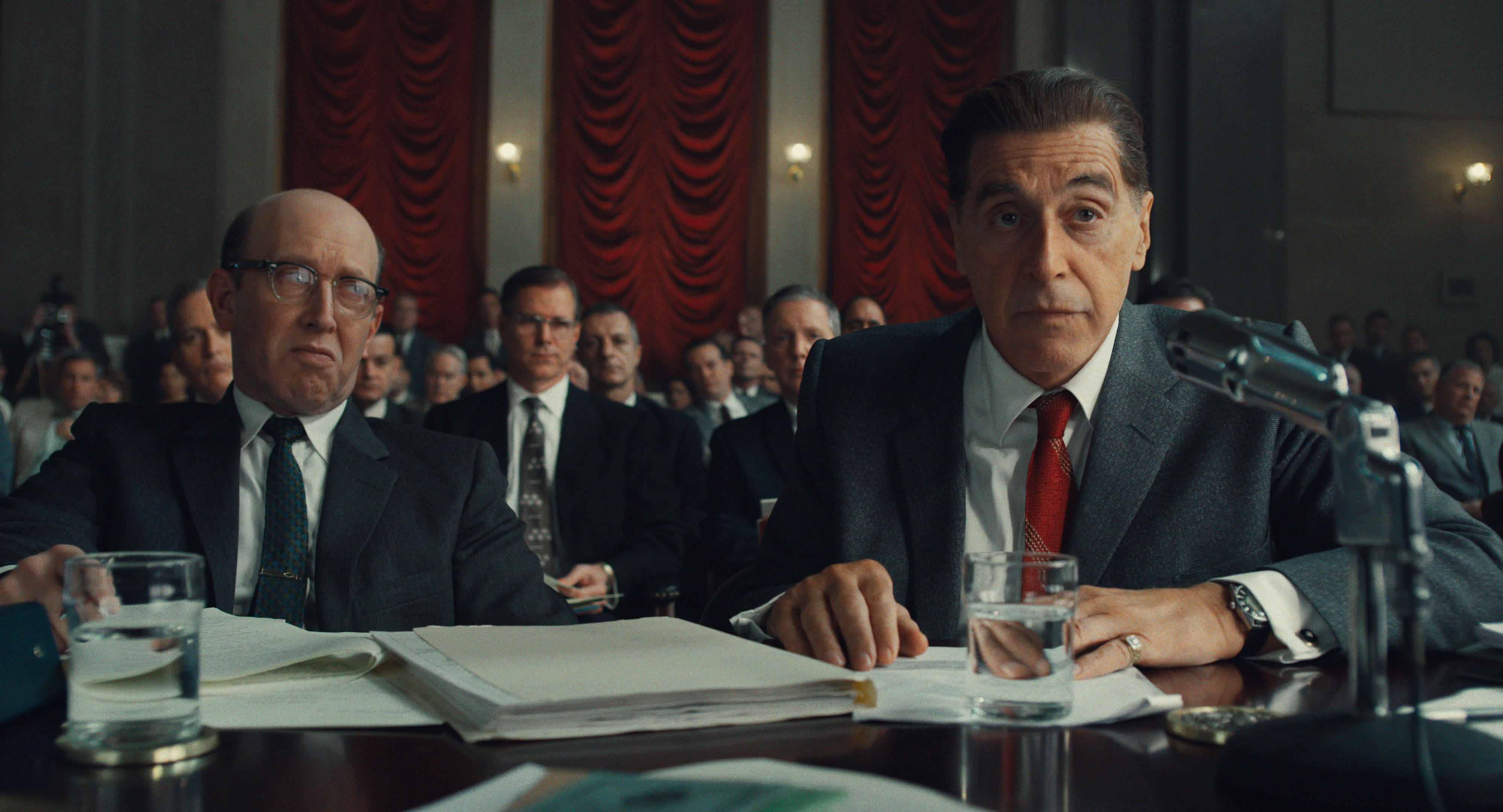 He used this tactic to gun down New York gangster “Crazy” Joe Gallo in a Manhattan diner in 1972, one of the most infamous mob murders. No one knew who did the hit until Sheeran’s confession was published in Brandt’s book three decades later.

It was during his time with Bufalino that Sheeran met Hoffa.

They became good friends, helped by his vicious treatment of anyone who got in Hoffa’s way.

But the union boss would eventually find out how brutal Sheeran could be once he came out of a stretch in prison. 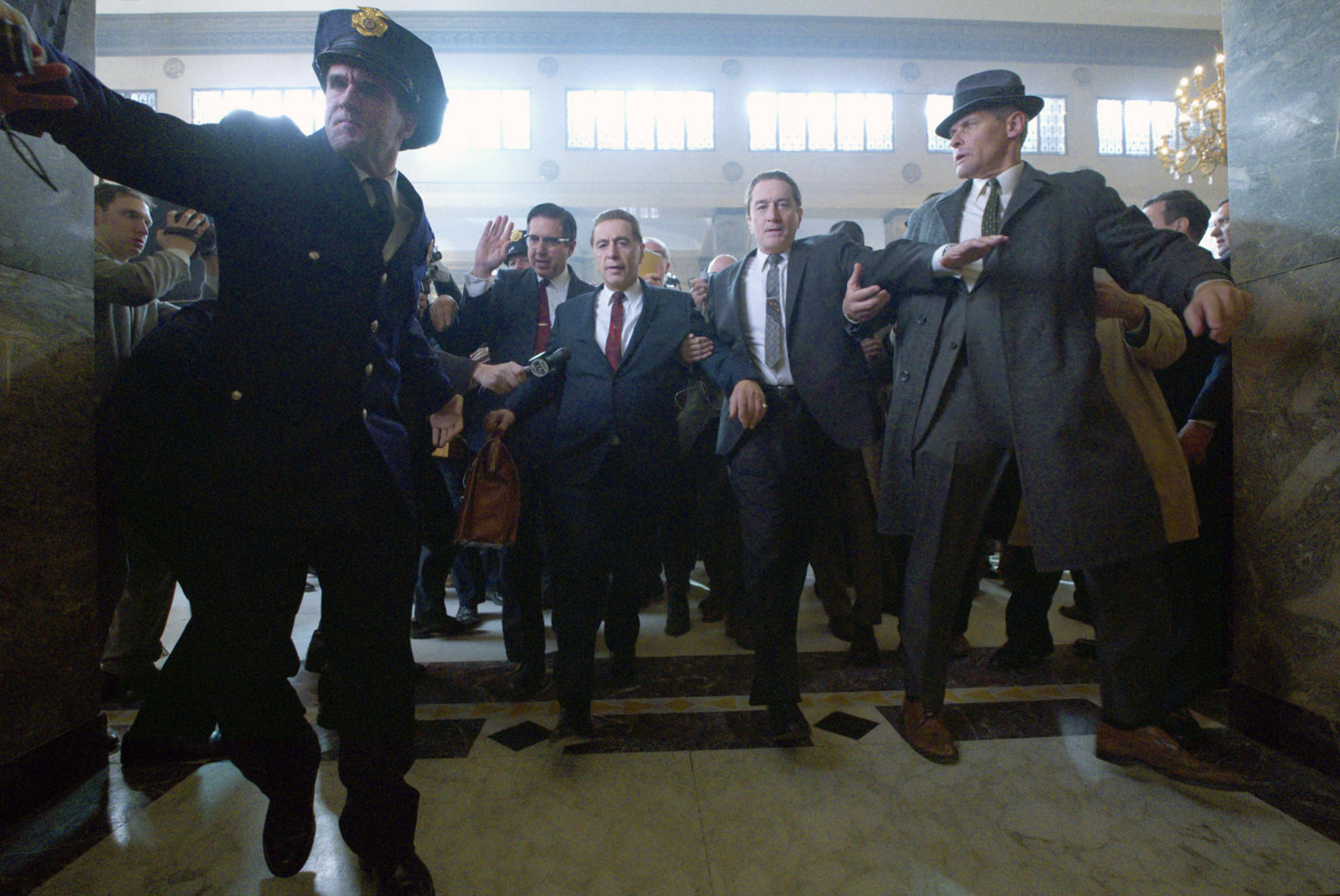 He is said to have put two bullets in the back of Hoffa’s head, a slaying he “felt nothing” about. The FBI drew up a list of nine suspects, including Sheeran, but no one was ever charged.

Sheeran ended up back inside, serving 18 years for fraud, labour racketeering and taking bribes.

The new film about his life will have a three-week cinema release, opening here on November 8, before streaming on Netflix from November 27. 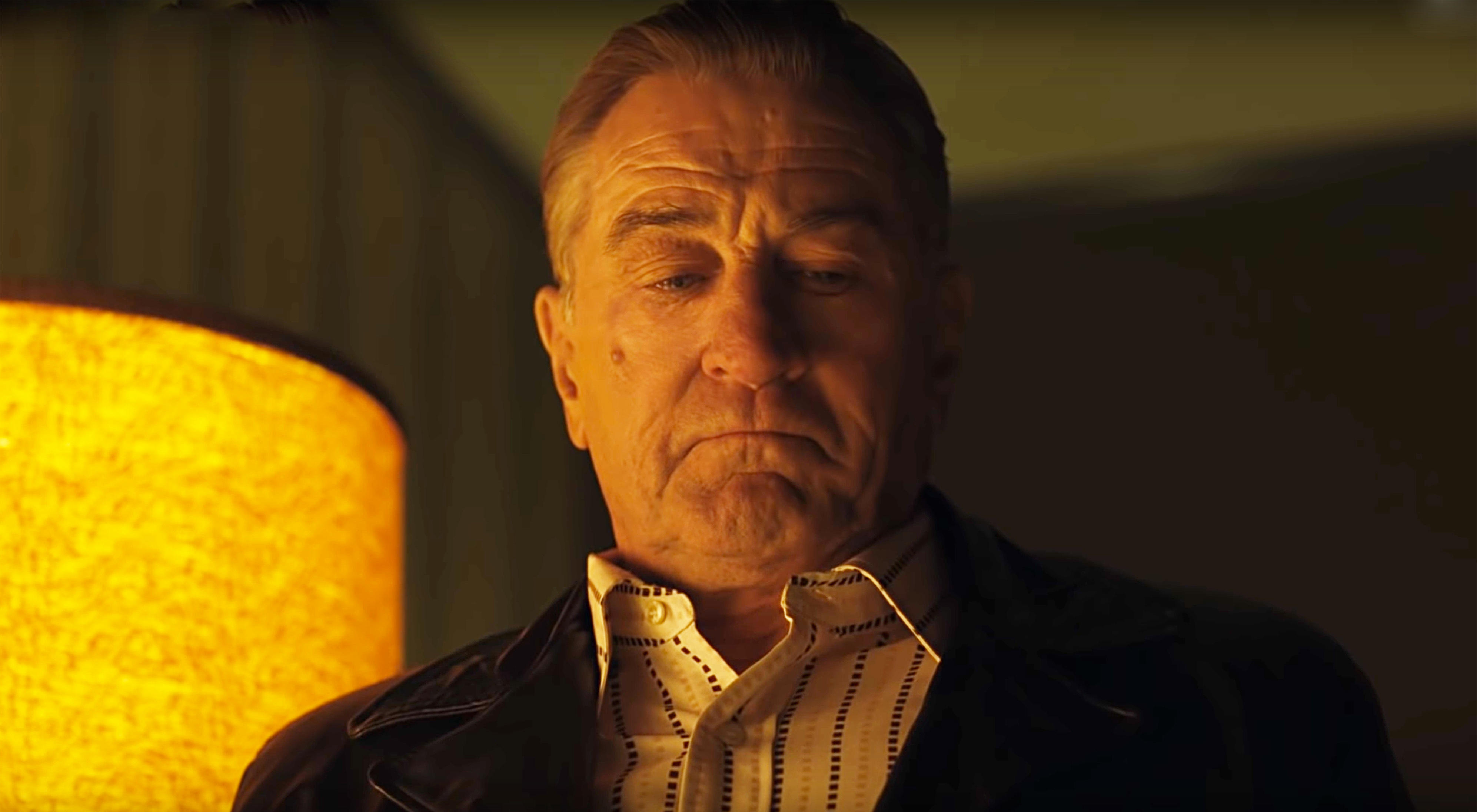 The move has angered some of the major UK cinema chains as films traditionally have a 16-week cinema run. Odeon, Cineworld and Vue have reportedly refused to show it.

But Scorsese, who won an Oscar for 2007’s The Departed, was more than happy to work with Netflix.

The director said: “The trade-off is no interference, full budget and a schedule that would allow for the CGI and, I have to say, the rhythm of the shoot to our age group.”

The Irishman made its debut at the New York Film Festival this month and critics went wild. 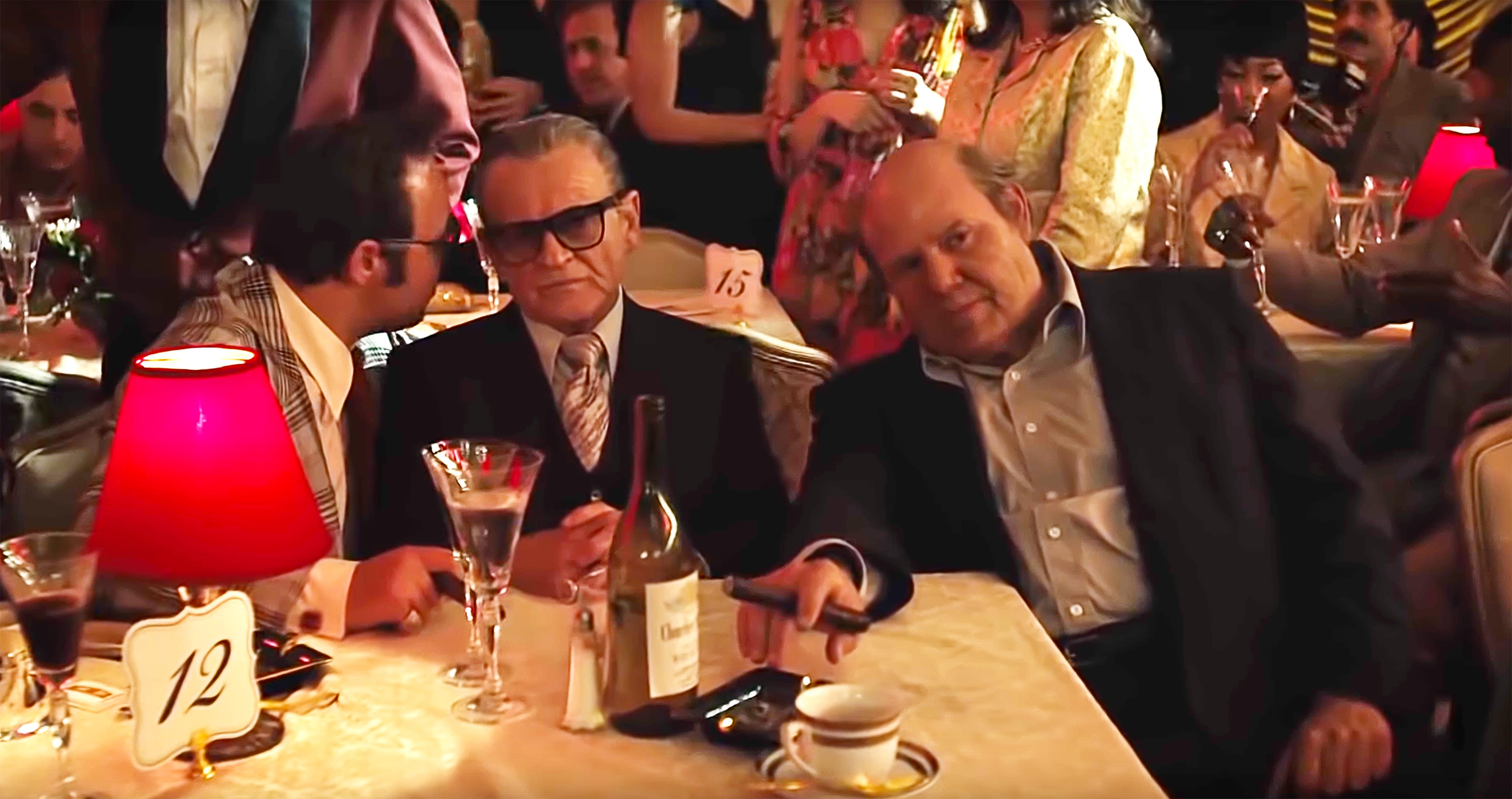 It is also thought that Netflix is gunning for an Oscar.

The story that eventually led to the big screen came about after attorney Brandt made contact with Sheeran while he was in prison.

Sheeran had developed a serious spinal disease and agreed to share his story. 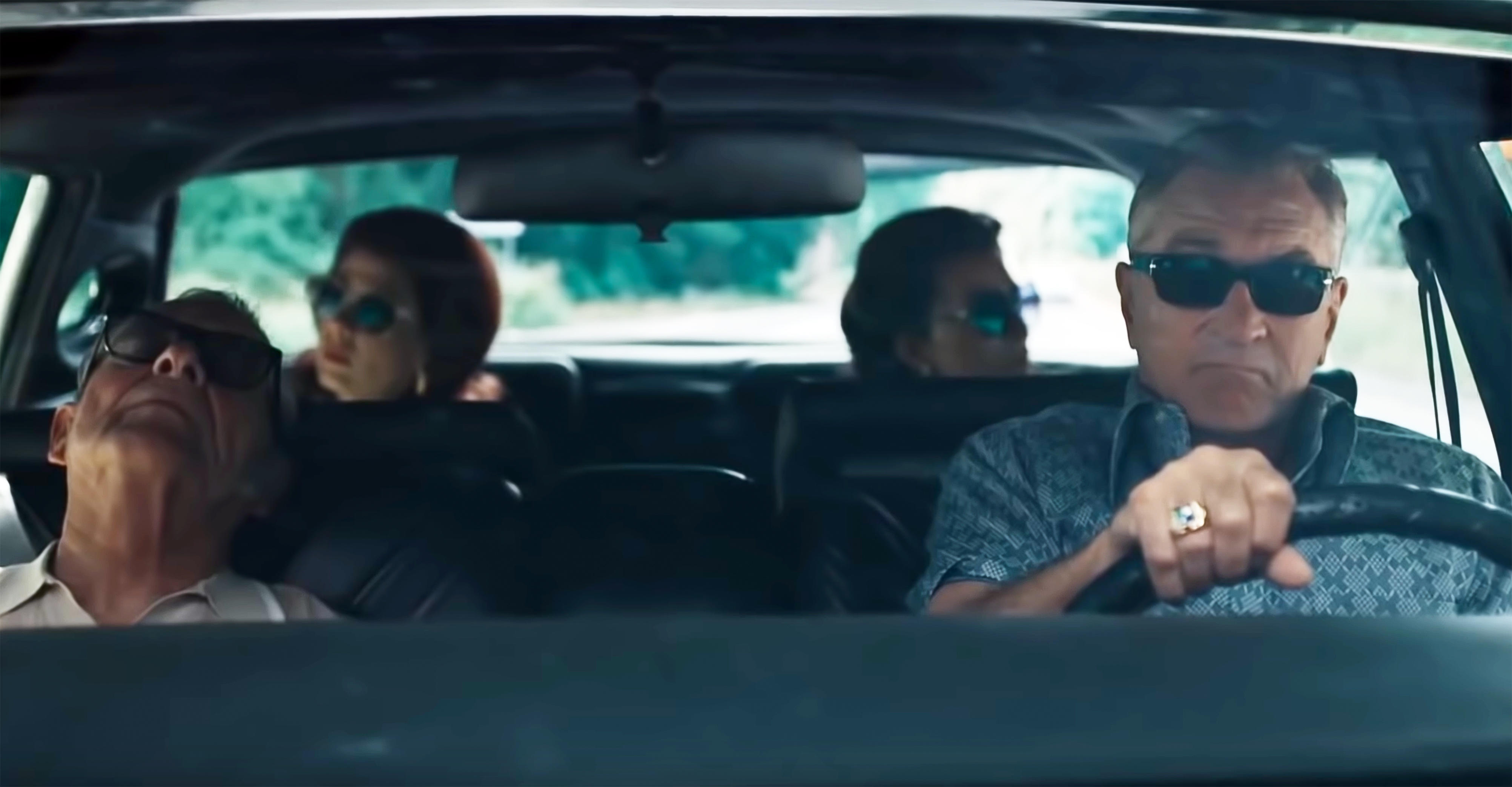 Brandt said: “I got a call from a representative of the Philadelphia mob, who wanted to get Frank Sheeran out of jail on medical grounds. He had severe spinal stenosis and needed surgery. So I represented him and got him out.

“Afterwards, his associates took my office out for lunch at an Italian restaurant.

“It was straight out of Goodfellas. I felt like I was in a gangster movie.

“I had written a detective novel. Frank said he was tired of being written about in articles and that he had read my book in prison.

IMAGINE being Martin Scorsese, having already made Goodfellas, The Departed and Taxi Driver,yet still having enough in the tank aged 76 to round up the greatest actors on the planet for one last love letter to mob life.

The Irishman is an epic, ­sprawling, dense movie that will go down as an instant classic.

It tells the story of Mafia hitman Frank “The Irishman” Sheeran as he looks back on his life of killing, both as a soldier and assassin for a crime family.

You’ll have already heard about the de-aging technique used on De Niro, Pacino (the first time the director has worked with him) and Pesci, who came out of retirement specially. It is unnoticeable, in as much as it isn’t a distraction during the three-and-a-half hour ­running time.

What you won’t have heard is just howwatchable the film is.

The time flew by.It was an utter joy seeingall these actors on screen together for perhaps one last hurrah.

It is Scorcese’s funniest film by a mile and the chemistry between Pesci and De Niro makes the hairs on your neck stand on end.

Full credit to British actor Stephen Graham, whoholds his own among this group of titans.

Rest assured, you will want to set aside a whole evening forthis – and then want to watch it again straight away.

“He wanted to tell his side of the story about what happened to Hoffa — and he wanted me to tell it. I knew he wanted to confess.”

Sheeran also appears to have had an uncharacteristic pang of remorse as he faced his own passing.

On his deathbed he said: “If I did all the things they allege I did and I had to do them over again, I would not do them.”