‘The Wheel of Time,’ ‘Arcane’ and ‘Hawkeye’ Are This Week’s Most In-Demand New Series

In this weekly data series powered by Parrot Analytics, we look at the top new TV shows of the past week across broadcast, cable and streaming — those that have premiered in the past 100 days.

“Hawkeye,” from Disney+, was the third most in-demand new series this week with 41.3 times the average series demand. Its third episode was released on Dec. 1 and demand for the show increased by 63% from last week. Coincidentally (or not), Hailee Steinfeld stars in both the second and third most in-demand breakout shows. It’s unclear how much her star power drove demand for these series, but interest in her has been boosted not only by these shows but also “Dickinson.” She was the second most in-demand actress in the US last week, ranking behind only Zendaya. 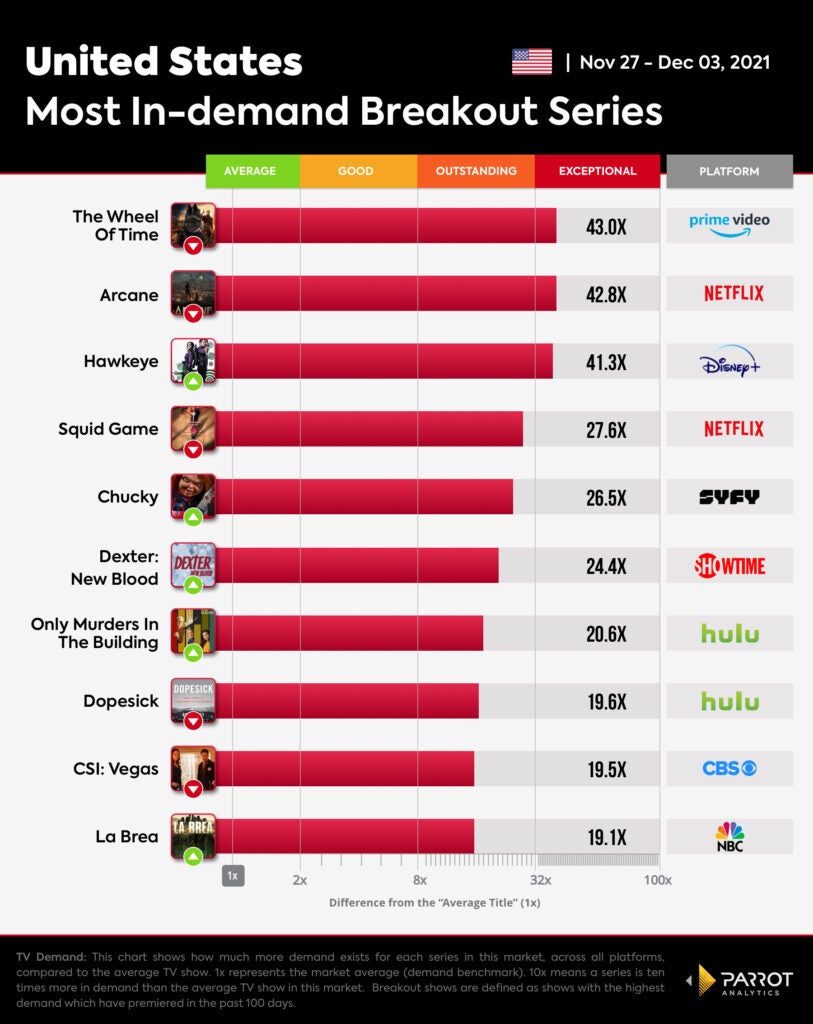 Demand for “Chucky” was up by 6% this week, as the final episode of the season aired on Nov. 30. This will be the last week Hulu’s “Only Murders in the Building” features in this breakout shows chart, not because of declining demand, but because it will have been more than 100 days since it premiered on Aug. 31. Demand for the show has stabilized at around 20 times the average series, indicating that this show’s popularity is not just a flash in the pan. Both “Chucky” and “Only Murders in the Building” have been renewed for second seasons.

“Dexter: New Blood” moved up one spot in this week’s ranking and continued to see strong demand growth for another week. Demand for the show increased by 20% this week. If the show continues to grow in demand like it has over the past few weeks, the Showtime revival will soon be near the top of the ranking.