However, as Vernon Kay and Rochelle Humes spoke to Jessica, some viewers took to Twitter to attack Jessica for spending up to £1million on surgery to achieve the look she wanted. This Morning faced a backlash for provoking such a reaction online from Twitter trolls.

Jessica recently underwent her 90th cosmetic procedure and the self-confessed Human Barbie returned to This Morning to share what was next.

After spending £1million on surgery, Jessica explained she now wanted a child.

She explained: “After so many plastic surgeries, I acheived this appearance, although it’s not the most natural look.

“There is an understanding I look like Barbie but in my former life I was nicknamed the Human Ken Doll for 10 years and I lived with that nickname. 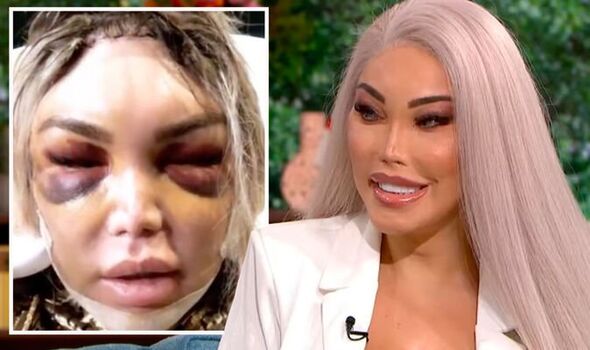 “But in reality, having so many surgeries was so I could be the woman I am today, to transition.”

Jessica maintained spending so much on surgery was so she could be the woman she wanted to be.

“I feel good and when I wake up in the morning, I look at myself in the mirror and I say thanks to God every morning, thanks to my family.”

Rochelle later asked: “So there’s another five percent there, does that mean you are done?”

“If you look at me would you change anything?” Jessica asked.

The host explained she would never have said Jessica needed to go under the knife but wanted to know how Jessica could be happy.

Jessica commented she would like a baby but “can’t get pregnant unless a miracle happens”.

“I’d like to be a mother and have a family and have a wedding like yours but first I need to find a suitor and that’s the challenge,”Jessica shared.

She also said it was “unfair” to say she is addicted to surgery: “I’m a woman, but, it pains me to say this, a biological man.”

Jessica listed a number of surgeries she had to go through in order to be the woman she is today.

There were several negative comments aimed at Jessica and some viewers hit out at This Morning for provoking such a response from Twitter trolls.

Tony Green posted on Twitter: “#ThisMorning I must admit, this “Barbie” interview isn’t my thing, but I haven’t seen this amount of pure hatred and toxic comments for a long time.

@QueerGoblin shared: “The amount of misogyny, transphobia, and plain nastiness I’m seeing today regarding the guest on #ThisMorning is frankly disgusting, she’s not hurting anyone so why not live her life?”

@KittyKat23 shared: “Disappointed at so many transphobic comments.

“Regardless of how someone looks their gender identity should always be respected #thismorning.”

This Morning airs weekdays on ITV from 10am.